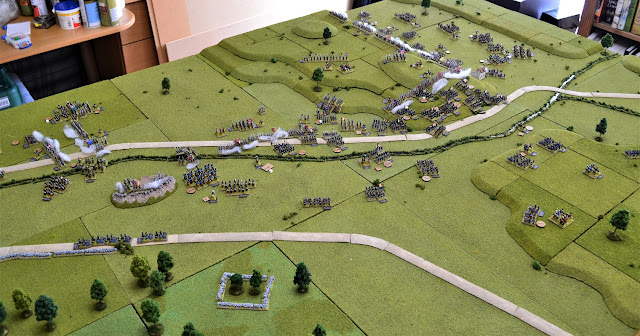 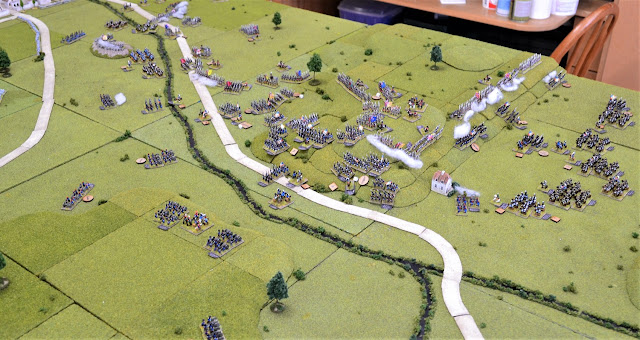 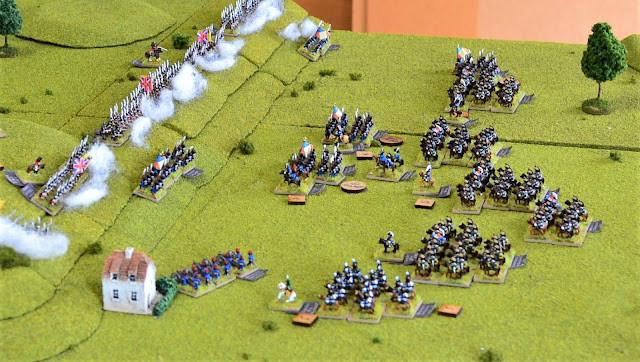 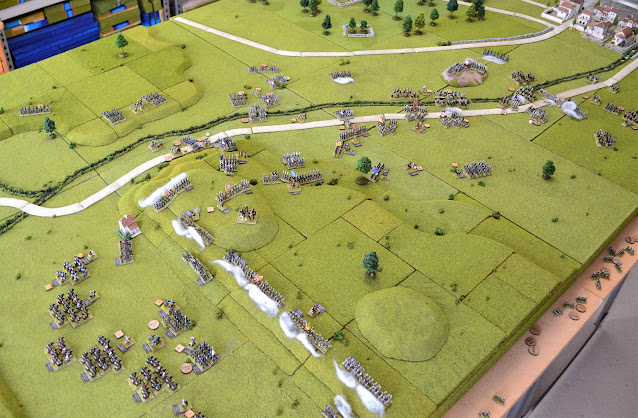 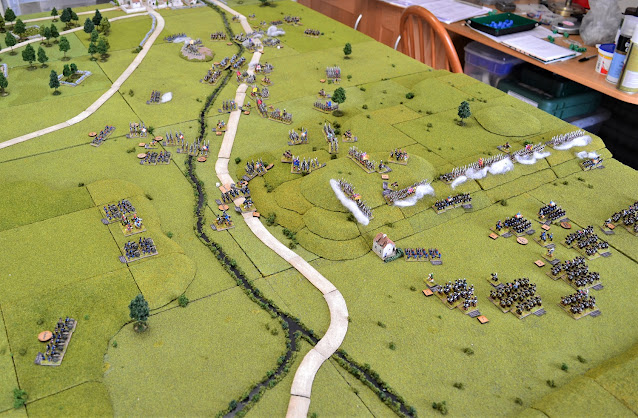 CONCLUSION
To say that game finished on a knife-edge is to put it mildly! I believed the end was in sight for the British when their line was broken in the centre and even more so as several French columns gained the summit of the Medellin.
The British had precious few reserves and for the 3rd Foot Guards it was an all or nothing charge in the centre that began the catastrophic turn of events for the French.
Awards really have to go to General Hill and the 87th Line. For several turns the French had won the initiative, but on this one the British succeeded at a critical time. This gave Hill leading the 87th the initiative in charging the French columns. The 87th also happened to be in attack column formation rather than the more usual British line giving them a greater charge range and manoeuvrability. The dice results were almost comical. The 3 French battalion targets of the 87th rolled a total of '4', '2' and '3' respectively on 2D6 in response to the charges. All routed before contact! The 87th on the other hand only rolled just enough to succeed with their 3 charges. On two occasions it was only the presence of Hill (+1 bonus) that lead to success.
This one action by the 87th triggered the total collapse of Vilatte's division and destroyed any prospect of success for the French.
As can be seen by the losses above, the British were dangerously close to collapse themselves.  I have little doubt that had it not been for the Guards and the 87th in particular, the French would have won. Most of the British battalions that had been holding the centre had suffered heavily and it would not have taken much to break them.
For the French, their problems began earlier in the game. The length of time it took them to clear the Northern Plain (the valley to the north of the Medellin) was far longer than anticipated and drew in Maubourg's reserve cavalry which could have been effective in supporting Lapisse' Division in the centre. This delayed the attack on the Medellin which when it did come required a more hasty, and thus less well co-ordinated, assault up the steep slopes.
Sebastiani's 4th Corps on the left suffered badly with Leval's Division paying a high price for routing the Spanish and Liger-Belair's likewise for ill-considered and wasteful assaults on the Pajar Redoubt. The end result being the lack of a decisive breakthrough on the British right flank.
Even so, the French were desperately unlucky and demonstrated that as long as they hold their nerve and push through the British musket volleys they can gain the advantage.
There are some issues with the rules in translating to large battles in 6mm that I am still tinkering with. These are:
Skirmishers
In my early games including Waterloo, I dispensed with them completely feeling that they would bog the game down too much and also very fiddly at this scale.
I settled on a reworking of the skirmish rules contained in Sam Mustafa's Grande Armee but also keeping some aspects of General de Brigade. Each battalion was given an 'SK' value based on its size and the number of skirmishers it could field. e.g. a 36 figure French battalion would have one company of 6 skirmishers which equates to a roll of 2D6 in GdB, or an SK value of 2. The SK values of all the battalions in a brigade are added together to give the Brigade skirmish screen value.
I stripped out most other aspects of skirmish rules in GdB assuming they will do as trained including recall to their parent battalions etc. As losses occurred in their parent battalions an equal proportion would be lost in their SK value. In the rules skirmishers can deploy up to 18 cm from their battalions and taking that into account along with their range gave an overall distance they can attack an enemy formation. Also taken into account would be proximity of cavalry.
Overall then an abstract way of handling skirmishers that does not bog the game down and does not physically represent them on the tabletop. In this battle I experimented with having a strip of skirmishers represent a brigade skirmish screen. It was not unworkable but I found it added detail for little or no benefit and a little fiddly.
I will therefore be revisiting my earlier incarnation of skirmish rules with perhaps some adjustments in ranges.
Army Break tests.
This is the first time I have used the GdB army break test in a game of this size. The collapse of the Spanish was perfectly plausible given the number of broken brigades and routing units. The French and British were a little more problematic. The former in particular were never in any danger of fleeing the field and therefore I felt it would be pointless to conduct a break test although it was obvious at this stage that they had failed in their objectives.
I can understand why such tests are built into rulesets to help bring a game to a conclusion where two opponents are involved and there is a limited amount of time to play.
For me though this of lesser value. Before I play the next Napoleonic game, I intend to make a decision on whether I will continue with such tests possibly leaving it purely down to brigade tests and seeing how that plays out. It will be a real test as the next game will be the largest I will have played since my Waterloo game (a French v Prussian affair in the campaign) and interesting to see how it pans out.
That brings to a conclusion my Talavera refight and will shortly be selecting the next battle to play in my Peninsular War project. I hope you found it as enjoyable reading it as I enjoyed playing it.
Posted by Jon Bleasdale at 18:31