On the Workbench: ECW Pike Basing

The issues to be considered are practicality, appearance when in march column and versatility in casualty removal.

Having now reached the basing stage for this batch of figures I trialled them as follows: 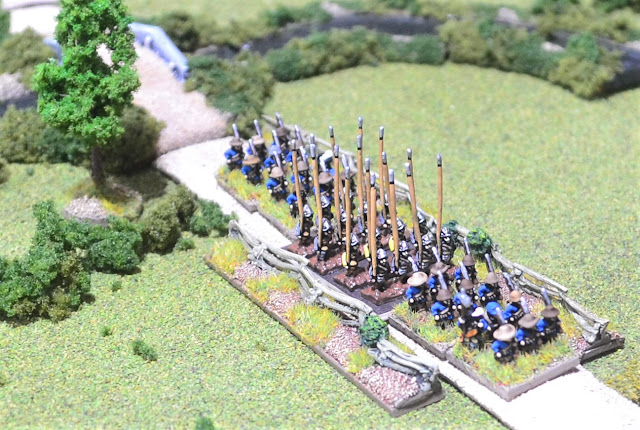 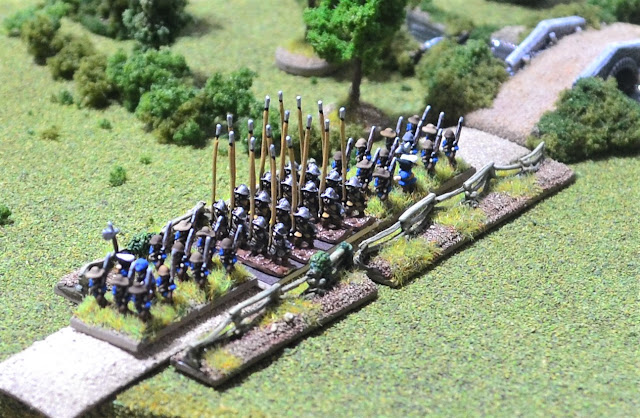 The first two photos shows the 8 figures option on two bases. When sandwiched between my traditionally based musketeers they actually looked better than I expected. In fact perfectly reasonable. 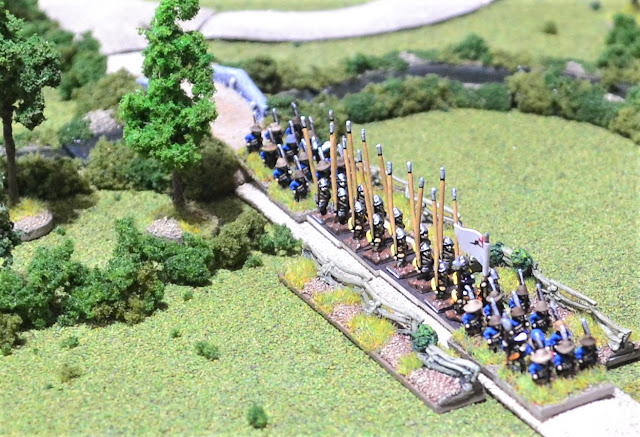 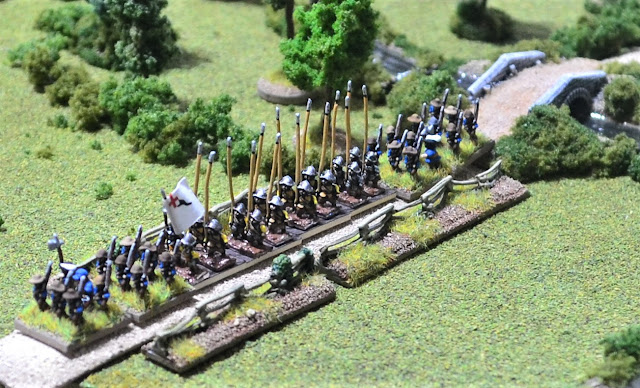 And now the 4 figure option on a 2 figure frontage. This clinched it for me for the march column test. Although the 8 figure base was ok, this looked a better representation.

For casualty removal, a smaller figure base has the obvious advantage in better representing a gradual reduction in unit strength. So another tick there.

Finally, practicality of handling such small bases in this scale with the potential of slowing play. I decided that given the other advantages, and the fact that this affects only small numbers of figures at present, that it would be worth basing them using the 4 figure option. Peter Little (his blog, 'Little's Wargames Diary', is listed on the right) has also conducted this experiment and feels they are not too small to handle. Having now glued them to their bases I get the same feeling. Only when in play will I know for certain whether I have made the right choice but I am cautiously optimistic.

You have a sneak preview of the ACW battle 'Seven Pines' in these photos which is currently being played through. The ECW intruded briefly!
Posted by Jon Bleasdale at 19:22 13 comments:

On the Workbench: ECW Parliamentarian Foote

Wargaming has been fairly limited this past week due to family commitments. I have though commenced playing out the ACW battle 'Seven Pines' taken from a Fire & Fury scenario book.

On the painting front, my first Parliamentarian Foote regiment has been completed. I will post the results as soon as these have been finished: 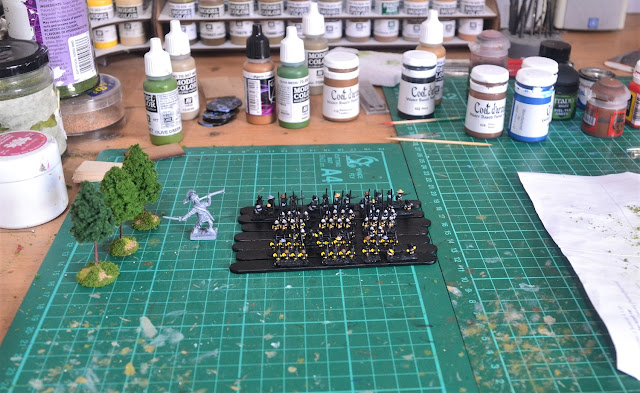 Two smaller regiments, a yellowcoat and a greycoat regiment. Both are 40 figures strong and with a 3:2 musket to pike ratio gives 24 musketeers and 16 pikemen.

This presents a problem with basing. The musketeers will be the usual 15mm x 15mm 6 figure bases. The obvious and sensible way to go with the pikemen would be two 20mm x 15mm bases containing 8 figures each. However, as readers of my blog will know, I like to be able to represent a unit marching in column along a road. A 20mm frontage base will fit within the width of my roads but a 4 x 4 pike block may look a little out of place. I am considering four 10mm frontage x 15mm bases each containing 4 figures. It would solve the column problem and also better represent casualty removal. The downside is the practicality in this scale.

I will therefore try out both before deciding which way to progress.

The large grey figure in the photo is an old 25mm Garrison figure from the 1970's. I had quickly painted him up as a statue in my 15mm games. Having rediscovered it while clearing out my 15mm collection I thought it would be great for 6mm. I just need to find a suitable plinth and give it a better paint job which should provide for a dramatic feature on the tabletop.

The 3 trees on the left are almost completed bulking out of cheap Chinese trees purchased over ebay.
Posted by Jon Bleasdale at 18:33 8 comments:

On the Workbench: Completed Royalist Army for Glastonbury

The Royalist army under the command of Hopton has been completed for the Battle of Glastonbury: 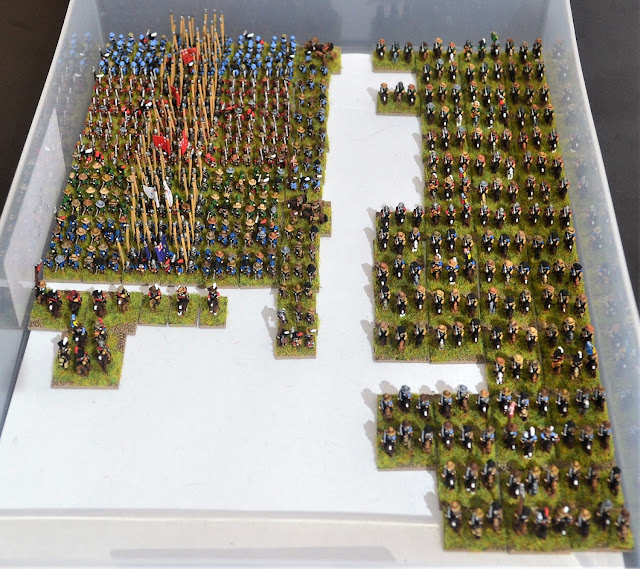 Since the last update, Dragoons and command have been added.

Mounted Dragoons bottom right of the photo and dismounted along the middle. Now I have gone really small for the dismounted dragoon bases! Something of a trial run for how I will base the British firing lines in the Zulu project. They are 3 to a base measuring 15mm x 10mm depth. The idea behind this being the ability to line them up in a single rank behind a hedgerow, fence or defending walls. I would not recommend basing an entire army (unless small) in this way for 6mm but limited units such as this should be fine.

I am well underway now in painting the first Parliamentarian foot regiment which will be smaller in size to their Royalist counterparts. The Roundheads were outnumbered in this action so will be quicker to prepare. I have to confess I am rather looking forward to playing this period again, it has been far too long since my last game.
Posted by Jon Bleasdale at 17:16 17 comments:

This is a fictional battle to try out my new 2mm Napoleonic figures. The reason for having a look at this scale is the possibility of playing the largest Napoleonic battles on my maximum (7'6" x 4'6") table and not taking years to paint the figures. Each base represents a brigade and therefore suitable rules will be used. In this particular action I am using my version of Fast Play Grande Armee. Essentially this is pretty much as written with a few tweaks.

This scenario is by Tom Barkalow and is downloadable from the Grande Armee website.
http://www.deepfriedhappymice.com/html/gw_ga_scenarios.html

The setting for this battle in the 1809 campaign and is a fictitious corps engagement assumed to be fought a few weeks after Apern-Essling. The premise is that French scouts have located an unguarded road that leads behind Austrian positions and a corps is dispatched as an advanced force to get as far along the road as possible. The Austrians detect the movement and hurriedly rush the nearest corps into a blocking position while pondering what to do next.

The French goal is to open the road being blocked by the Austrian forces and to hold it open off the table. The Austrian goal is to prevent this. 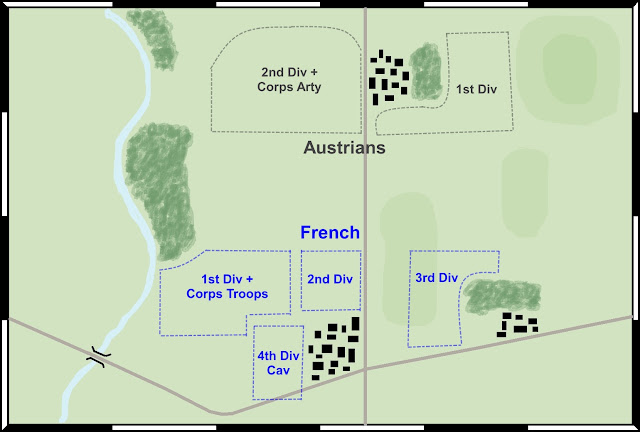 For some time I have been intending to find software or a method of easily producing battlefield maps for my AAR's. Where I have played scenarios from publications I have been loathe to copy those directly into the blog. Aside from potential copyright issues I have felt uncomfortable using somebody else's intellectual property without their permission.

Recently I have been viewing the backlog of Little Wars TV excellent Youtube videos when I arrived at one providing a tutorial on how they create their maps using the free Microsoft Paint programme. Even for a technophobe such as myself this appeared achievable. I used a very basic one for the first time the Buq Buq WW2 AAR.

The following are three I have created for forthcoming games:


The borders represent my 9" section terrain boards. So top is 4'6" x 3', middle 6' x 3'9" and bottom 3'9" x 3'9". These are the colours used by Little Wars TV apart from stone walls, hedgerows and crop fields which are my own creations. I may experiment a little with the greens to make the hills clearer and likewise darken the blue for rivers.

Unlike Little Wars I switch to PhotoScape X to add text, arrows and unit symbols. For Glastonbury I finally switched back again to Paint to fill in the white section of the cavalry symbols and add the dash to indicate the facing of each unit. I find PhotoScape X is easier to use for moving text around and changing its angle.

To save time I have created a plain map in base green for each sized board I am likely to use. I then just copy over the relevant size that I need and fill in detail from there.

If you get the urge to create some yourself, pop over to the Little Wars TV website (link on the right) and locate the map tutorial.

For the final action in Battle for the Camps I turn to Buq Buq. It is a scenario drawn from Robert Avery's "Operation Compass" for "I Ain't Been Shot, Mum" rules. Orbats were largely taken from "Benghazi Handicap" by Frank Chadwick for Command Decision with some adjustments to allow for what I possessed.

With Operation Compass progressing well, the 7th Armoured Brigade supported by 2 squadrons of the 11th Hussars had been sent forward to Buq Buq on the coast. There they found the Italians in full retreat and, sweeping through the town, caught up with the 64th Catanzaro Division a little to the east. Some parts of the division were caught while moving and surrendered after a brief hammering from the British tanks. The rest had found a good defensive position amongst the sand dunes between the coastal road and the sea, with their flanks protected by saltpans and mud-flats.

This scenario represents that attack on the remains of the 64th Catanzaro Division as they hurriedly prepare their defensive positions.

The British armour will assault a makeshift Italian artillery position not knowing than an area of the ground that they will have to cross is a dried salt marsh that will bog down their vehicles.

The Battlefield and Terrain: 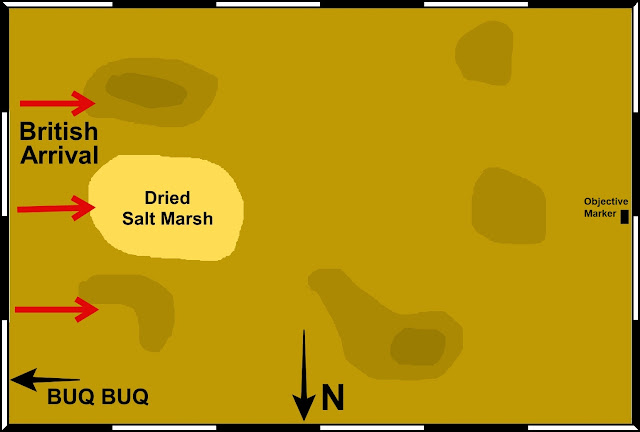 The terrain consists of a sequence of long, low sandy dunes with the most prominent marked in a darker colour on the map (mine are a little too large and rocky but will have to stand in until I produce more dunes). The going is very bad and at the start of each turn, any vehicle that intends to move must roll 2d6: If it rolls a 'double 1', then it has become temporarily bogged down and cannot move that turn. A 'double 6', it has broken down.

Otherwise the table is covered with slight undulations and patches of rough scrub that provide some sort of cover and spotting benefits but are shallow and sparse enough not to affect movement. All infantry moving up or down the dunes deducts 2cm from movement. The dunes provide same sort of cover as high ground.

The dried salt marsh is a significant hazard. Any vehicle that ends its movement within that area is automatically bogged down for the rest of the game. Any vehicle that completely crosses the area during its turn bogs down permanently half way across.

The black and white bars around the map edges represent each of my 9" tile sections.

On the Workbench: Royalist Foot

Good progress has been made of late with the ECW project. 2 more Royalist foot regiments have been completed including another with a slight colour change: 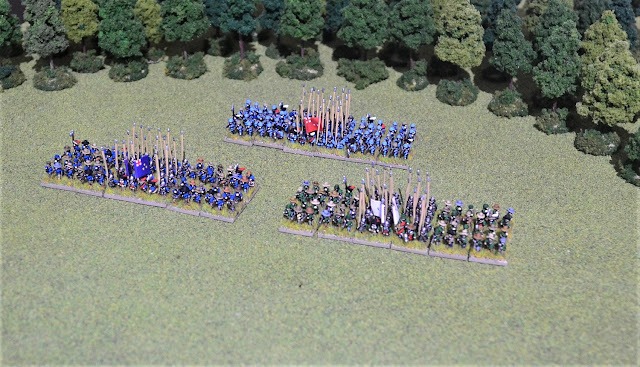 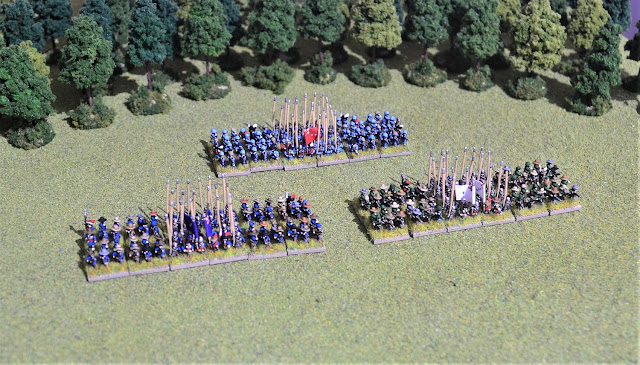 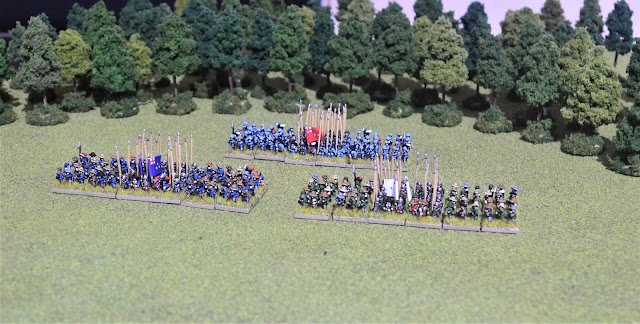 The blue and greencoats in the foreground are the newly completed regiments. I know that very few, if any, regiments managed to maintain any uniform appearance but well.... these are wargame figures! In my old re-enactment days all regiments wore their designated colour coat with pride and although not strictly accurate, it does look good.

The regiment in the background is Hopton's bluecoats and the first I painted. I have had something of a mental block with these. The first blue I tried was simply not right. A second attempt was better and featured in an 'On the Workbench' post. I was still not happy so once again tried another shade. This time Vallejo 902 Azure blue. They still look a little bright in the photos but are ok in the raw. This is the first time I have used Kevin Dallimore's 3 coat method on 6mm! 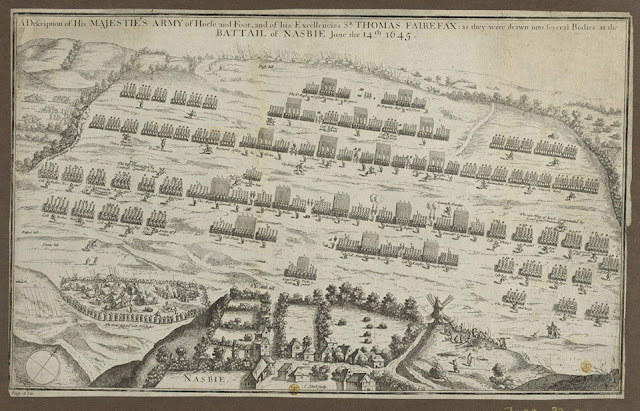 The other issue was whether to go 2 or 4 deep with the musketeers. These are large units and strung out 2 deep would use a substantial chunk of the battlefield. So for these it is 4 deep for now which reflects the above depiction of Naseby quite well.

This brings to a conclusion the Royalist foot for the Battle of Glastonbury. I am now well into the Dragoons followed by the command bases which will complete the Royalist force.