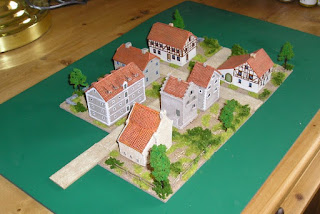 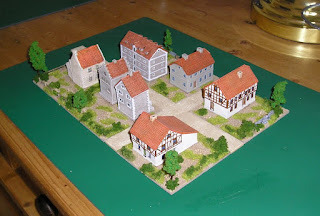 Slight delay this month as I took the opportunity to finish town bases for Quatre Bras. Nevertheless almost managed the 300 figure target for the month. Will now concentrate on finishing the British Cavalry, Artillery and Command bases for Waterloo.
Posted by Jon Bleasdale at 12:16 No comments:

The terrain for Quatre Bras needs completing which should just be the building bases and the roads for the built up areas. There may be a few extra road sections and wooded areas to complete which I will determine when the board is set up, probably in the next month or two. Hope to fight Quatre Bras during March.

AWI - 20mm
About time I resumed some 20mm plastics and as a break from 6mm may paint up a couple of units of British.

Sudan - 15mm
At some point may resume the Sudan campaign with extra figs painted.

Pirates - 15mm
Must have a game this year which may require the ship to be finished off.

Other
Other possible painting projects includes the continuation of Op Nostalgia campaign in 15mm with ships painted. 1/2400 ships for the Napoleonic period is another possibility.

Posted by Jon Bleasdale at 20:48 No comments: