On the Workbench: Grumman Martlets

A squadron of 12 Grumman Martlets of the Fleet Air Arm have been completed in 1/600th scale. These aircraft from Tumbling Dice are a pleasure to paint and so much quicker than 1/300th. It also makes a nice break from painting figures. 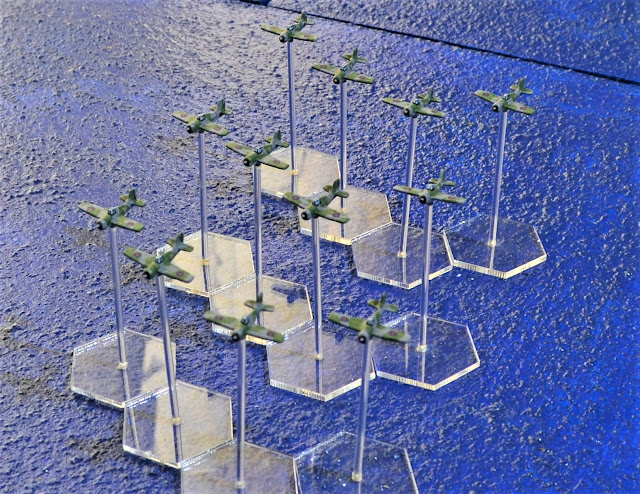 Only 8 will be needed to fly off the deck of HMS Biter in my 'Operation Nostalgia' campaign but it seemed to make sense to complete an entire squadron.

On a different subject, the naval battle of Cyprus from the campaign began yesterday using GQ3 rules. I had decided on a scale of 1cm = 200yds which is an option in the rules but designed more for 1/6000th ships rather than the 1/3000 I use. The reason being that I felt it would be more suitable for my 6' x 3'9" table.

Having played a few moves it soon became apparent that it was not going to work as well, particularly when it came to conducting turns. So today I bit the bullet and started again but using the recommended 1cm = 100yds scale. So far it would appear I need not have worried as it is playing fine on my table size.

I should have the AAR posted on the blog in 2 or 3 days.

On the Workbench: More ships and planes!

It is now shockingly over 2 weeks since the last 'On the Workbench' update. That said there is not a great deal to report as pretty much the same as before. More planes and ships. 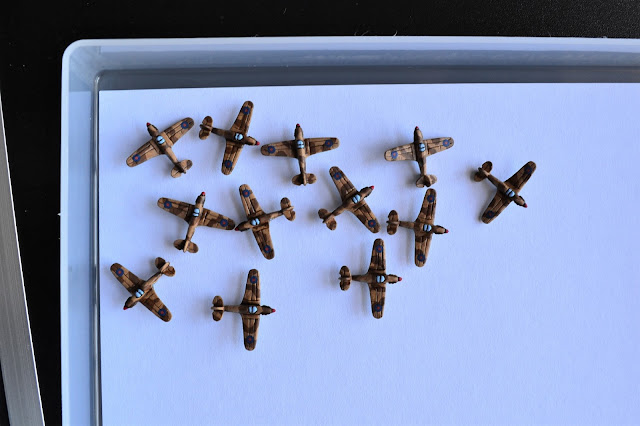 The first squadron of 1/600 Hurricanes have been completed. There had been a delay awaiting decals from Domsdecals. I ordered these at the beginning of June and still not arrived. It would appear Dom is having problems keeping this line running. I finally managed to acquire some from Tumbling Dice hence the completion of this squadron. 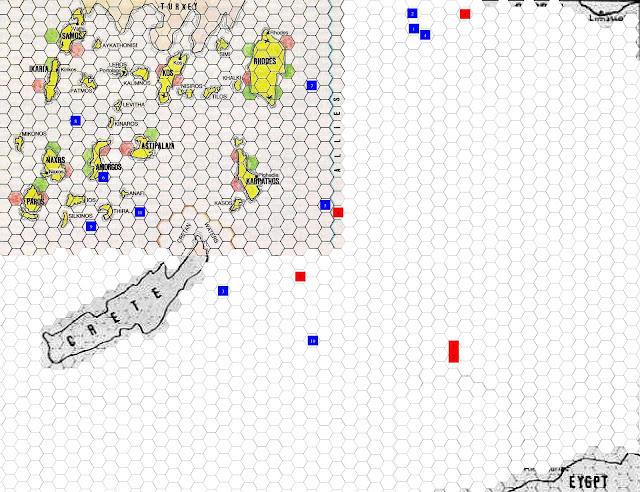 The overall situation at the end of move 6 on day 1.

Continued -
Read more »
Posted by Jon Bleasdale at 18:20 No comments:

Operation Nostalgia: More about the background and concepts.

This posting is in response to comments made by one of the administrators in the Naval Wargaming Facebook Group about the 'Battle of Kasos' naval battle and the campaign in general. It raises issues that may also have occurred to some readers of the blog. I was not prepared to enter into a protracted debate on Facebook - I have seen all too often how those turn out!

The criticism in many ways is perfectly valid. Firstly why are there German ships in the Aegean in 1943? It was pointed out that in the original articles in Wargames Illustrated an example was given of this being a group of vessels on a flag-waving exercise in mid 1939 that remained in the Med after war broke out. The point was then made that the T4 and T24 torpedo boats were not available in 1939. The Germans had captured Italian and French vessels, why not use them? I quote, "I have no problem with the basic premise of the campaign. I just think it would be more realistic to have used 'Italian' torpedo boats, which were taken over by the Germans."

There are two principle generators of my tabletop games. Recreations of historical encounters and campaigns. For the former I try to be as accurate as possible within the limitations of my available space, terrain and collections. For the latter, unless it is a specific historical campaign which I am seeking to play out (none currently underway) then I am none too vexed about the precise orders of battle, terrain etc.

Dealing specifically with 'Operation Nostalgia', it is a fictional campaign based around a proposed invasion of the Greek Islands in the Aegean. Like my other campaigns, I view this as a method of generating interesting actions on the tabletop each of which have consequences further down the line. I never intended it to be a 'what if' campaign. Although most of the forces involved have the sort of kit available in 1943, I have been a little wayward in selecting some of the ships, one or two of the minor vessels were not even built yet. I did this for no other reason that I had models of those ships and I wanted to include them. I am not particularly fussed about how the German ships got to the Aegean, they are there for my campaign!

Which brings me onto the reason for this posting on my blog. We have a small fascinating hobby and a few months ago I chose to do my bit in promoting it by broadcasting to the public how I wargame through this blog. For those new to the hobby, or for that matter those like me who are a little longer in the tooth, it might provide ideas for your own games. For some it may not appeal and others, like the Facebook Group admin, it may not be historically accurate enough for their taste. That's fine, but this is how I wargame and after 50 years I am not about to change any time soon.

My message to all those new to the hobby is do whatever you like to create your own fun game. If you want to send Type 45 destroyers into the Battle of Narvik and get fun out of doing it then great. The emphasis is on 'FUN' as Jay Arnold spells out at the end of each of his podcasts. I would never presume to pass judgement on anybody else's wargaming. To me the fact that you are wargaming gets a huge thumbs up.

I apologise if this comes across as something of a rant. Whilst none of us are above criticism, I have to confess at being a little miffed on this occasion!

So this is the first action of the campaign and not unexpectedly, it is a naval battle.
To recap:

A British force of MTB's and MGB's have put ashore several units of Royal Marines Commandos on the small island of Kasos off the southern tip of the much larger island of Karpathos. As night falls the mist clears and for the first time all day the weather settles.

In the meantime a German flotilla of Torpedo Boats are on routine patrol to the south of Kasos. They turn northwards to run past Kasos not expecting any enemy vessels to be in the area. As they approach the island a lookout on the German Torpedo Boat Albatross sees several small craft moving away from the beach. 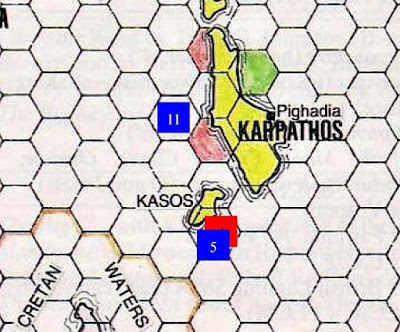 Zooming in on the map shows the proximity of the action to Karpathos and the scene of the first battle.

Fairly soon I intend to game the Battle of Oporto in my Peninsular War project. This project involves fighting the battles of the Peninsular in chronological order. Initially this will be the battles involving the British forces but in time I intend to add those fought by the Spanish.

For the sake of completeness, I am posting this After Action Report on the Battle of Vimeiro which I played 3 years ago! I had not realised it was so long. This was played solo in my garage before moving to my now permanent wargames room in the house. Lighting was poor so some of the photos are not as clear as I would have liked. I had less 6mm terrain than I have now, particularly with regard to hills. I made do with my existing collection which were designed more for 15mm + figures.

I kept few notes so the detail will be less than usual but I will hopefully be able to convey the progress of the battle that will enable the reader to understand and enjoy the action on the tabletop. 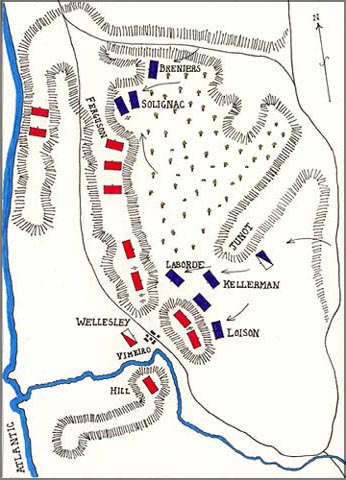 On The Workbench: Bag the Hun templates and yet more ships.

Too much heat than is  healthy for us damp cold Brits, my son's wedding and England football team doing something highly unusual in the World Cup has conspired to adversely affect my wargaming time!

I am getting back on track although the damn heat is still here! The most immediate need now is to prepare for the first battle in my 'Operation Nostalgia' campaign which is a coastal naval action. Involving a total of 7 MTB's and MGB's of the Royal Navy against 4 German Torpedo Boats (effectively destroyer escorts). I have them all in 1/3000th scale but it is too small an action to do it justice in this scale. I decided in the end that 1/1200th would be the best option. 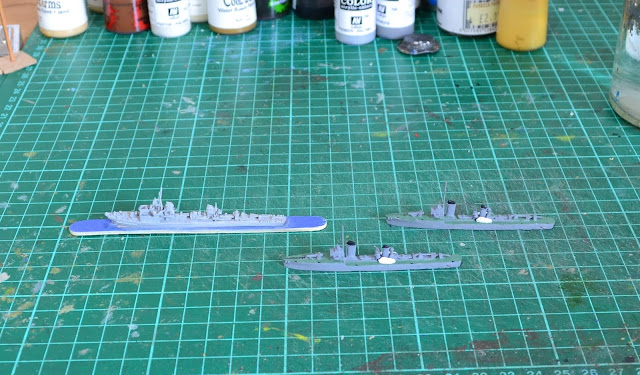 Here are 3 of the 4 torpedo boats with, from the left, T24 (Hallmark), Albatross and Mowe (2 models from the 70's and in need of repainting). T4 together with the British MTB's and MGB's have been ordered from Magister Millitum. I will crack on a paint up these as soon as they arrive.

The first day move of day one so the allied fleets set sail from Cyprus and Egypt. 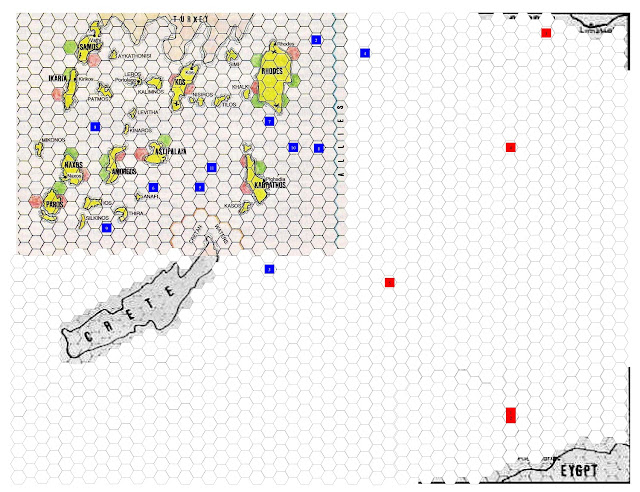 Concentrating for a moment on the allies, red counter numbers 1 and 2 represent the 8th Army and US Army transports with escorting fleets leaving Egypt. Red counter number 3 is the 1st Army force underway from Limassol in Cyprus.

Although it may be difficult to see at this scale, red 4 represents the MTB's and MGB's transporting the Commandos towards Kasos from Cyprus. Red 5 is the British submarine Triton forward deployed and in its patrol area.

Allied forces have been assembled and ships, now fully embarked, set sail for their allotted destinations. 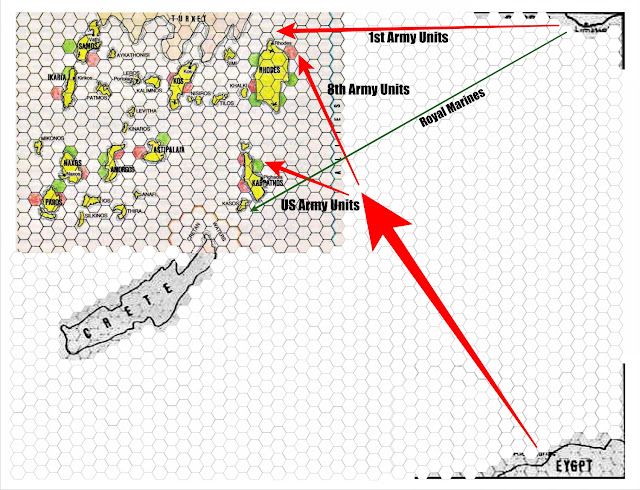 The naval force from Egypt is lead by the Cruiser Norfolk and contains the escort carrier Avenger.  Soon after leaving port 2 Seafires fly from Avenger's deck and perform a Combat Air Patrol.

As the fleet nears Karpathos it will split with the US Army units detaching to capture Karpathos. The 8th Army units will rendezvous with the 1st Army fleet lead by Exeter with the combined force tasked with capturing Rhodes.

A force of Royal Marine Commandos will race ahead in MTB's and MGB's to make a landing on the small island of Kasos. Their orders are to eliminate any resistance and monitor any traffic moving through the channel between Crete and Karpathos.