After a couple of years painting the odd ship as a sideline to my main projects, I have finally decided to kickstart this campaign as a project. So as not to perpetually add to an ever-lengthening project list, I have cancelled the Kingmaker Wars of the Roses campaign. This was the only non-solo project but unfortunately my opponent found it difficult to find time when we were both available due to his job and child commitments.

The campaign is one of several from the Old Dominion Gameworks site Home (odgw.com). Although based on the General Quarters 3 rules (which I shall be using), any set of WW2 naval rules can be used. 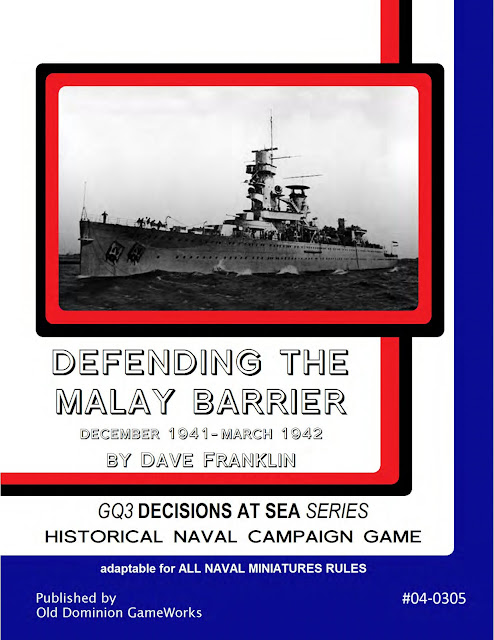 The campaign covers the early months of the war in the Pacific over 6 bi-weekly turns plus an optional turn 0 (8th - 15th December 1941) involving the sortie by Force Z. As this is a naval campaign, the land element is dealt with in the abstract.
My campaign will include turn 0, the sweep by Force Z attempting to intercept the IJN Malayan invasion force.
I will cover the campaign in more detail in future posts.
Posted by Jon Bleasdale at 18:17 6 comments:

This game is an adaption of a Rapid Fire scenario in the 'Normandy Battlegames' scenario book. It is relatively straightforward to adapt for Blitzkrieg Commander 4 with slightly more AFV's being the most obvious change.

Background to the battle.

After D-Day the 50th Infantry Division supported by the 8th Armoured Brigade pushed forward south of Bayeux in an attempt to take Tilly-sur-Suelles prior to a move on Villers Bocage with a view to outflanking the German defenders of Caen.

The Germans had been reinforced by the Panzer Lehr Division who launched an attack towards Bayeux on the 9th June advancing to within 3 miles before being pulled back. On 11th June the 69th Brigade of the 50th Division attacked SS units defending the villages of Brouay and Cristot with the particular aim of capturing Hill 102, a slight rise giving commanding views over the area.

This scenario covers that assault by the 69th Brigade. 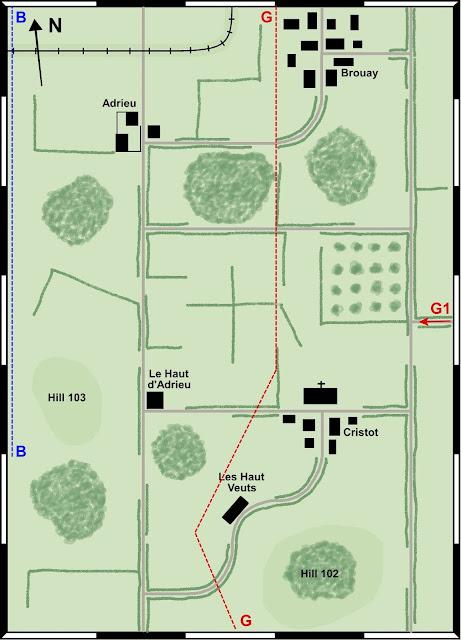 There follows a lull in the fighting as all 3 French thrusts are held. The French had enjoyed a significant amount of success until these simultaneous setbacks. Had any one of them achieved victory freeing up resources for the other two, the allies may well have been facing defeat in the campaign. Victory is not assured for the allies yet though with the French switching to defence.

I will begin with the strategic maps giving an overview before zooming in one each theatre for more detail. I have not included every day's movements to avoid being swamped in maps, but it should be sufficient to indicate what has happened.

The hiatus in my wargaming has unfortunately, extended into the new year. Having moved into a newbuild house last year I was fully aware that I would need deal with cracking caused by the house drying out and settling. The new year was my target to complete this work believing 2 or 3 days should sort it. How wrong I was. After a week of recaulking, filling and sanding I have still not lifted a paint brush!

Cristot is gathering dust (and cobwebs) in the garage although I did manage to complete Usher's dragoons, the last unit for Edgehill. Even figure painting is now suspended.

All being well normal service will be resumed in a few days. The Napoleonic campaign map moves have been completed leading to the next battle and will be the next blog post as soon as I have prepped it. I hope to have Edgehill on the board after Cristot but there will be a brief interlude while I insulate the garage door. The cold snap we had in December defeated my heaters and insulating the door is a fairly easy upgrade to improve the temperature. I have received a garage door insulation kit designed for the purpose and hopefully will do the job.

In the meantime, back to the rather less exciting task of sanding and painting.

As the new year approaches it is time to think about what I shall do over the next 12 months. Although I have had mixed results in sticking to previous years plans, I do tend to find it helps in focussing my attention rather than bursting off in all directions which I have been known to do!

As in previous years I will break down my plans into Battles, Campaigns, Painting/Modelling.

So without further ado, onto the plans:

Edgehill - Almost ready to play this and will be a priority in the new year.

Peninsular War project - Battle of Busaco 27th September 1810. There are a fair number of figures to paint before this game will be ready so probably 50:50 if this will be on the table in 2023.

Napoleonic Campaign - At the time of writing this I am still completing campaign map moves. There will certainly be at least one battle played out this coming year.

Gettysburg Day 2 - I have been intending for several years to play this game but for a variety of reasons has fallen by the wayside. There is no excuse though as my available gaming area is now sufficient for a battle of this size. There are terrain pieces that have yet to be painted but I simply have to get this up on the tabletop this coming year.

Rorkes Drift - Most of the figures have now been painted with just the terrain to be completed.

A priority to get the figures painted followed by terrain. I intend to make this one of the targets this year but unsure as to whether I will complete all the collection required. Hopefully though I will get something on the table even if only a test game.

Cristot (Normandy 1944) - Already on the board with an AAR due to be posted within the next few weeks.

Battle south of Nibeiwa - Operation Compass campaign and another priority for the year.

Groesbeek Heights - Op Market Garden. Another target but dependant on being able to get the figures painted in time.

My wargaming has slowed to a crawl since my last blog posting. A host of reasons intruded on my available time not least a downturn in my wargaming mojo! Over a month ago I set up a WW2 game, the battle of Cristot, and so far have only completed a half dozen turns. I did though manage to keep up a reasonably steady amounting of painting, more of that below.

So with the end of year approaching, it is time to review what I have completed over the past 12 months. As in previous years I will republish my plans for the year and update them as to what has been accomplished. Text in italics are taken from those plans.

Unfortunately, no further forward. It was my intention to construct an iron age hillfort, and although tempted to forsake that just to get the game done, decided I really should complete the construction given the location of the action. I have completed the base and some test palisade and hope to progress this early in the new year. 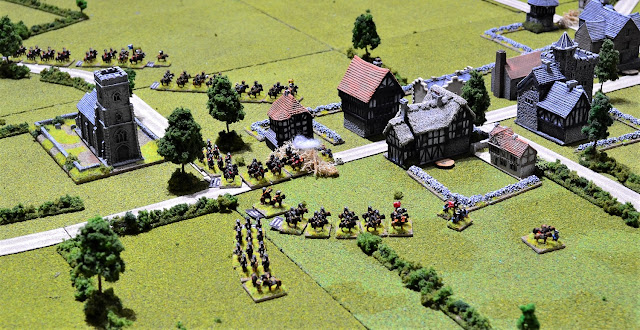 Edgehill - a considerable number of figures need to be painted. I have included this battle as a possible although probably a long-shot for this year.

Definitely on course to be played next year.