One the Workbench: 6mm WW2 for Op Nostalgia

This will be my final blog post before I go on hols from 22nd July to 9th August. I will be back to the Stone Age with no internet! I will therefore not be able to respond to any queries or comments until my return.

Today saw the last units completed before my break. This completes all the figures I need for my invasion of Rhodes game in the Op Nostalgia WW2 campaign. I do have some terrain to complete, particularly airfields. 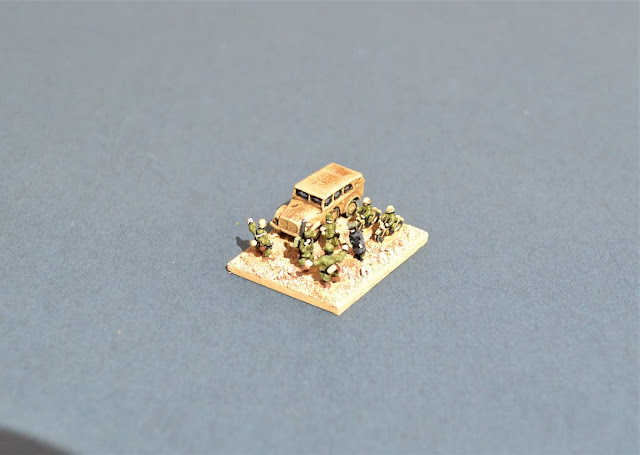 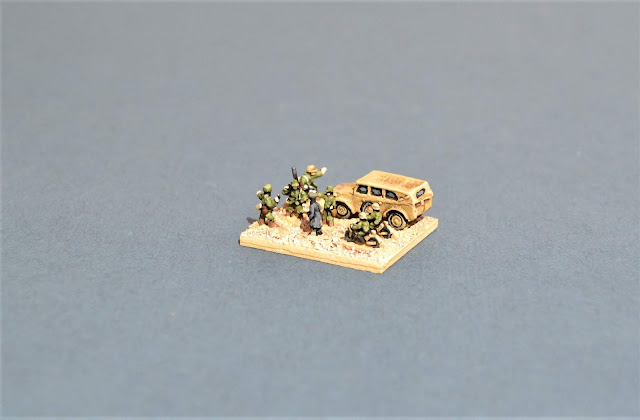 This will be the German CO base which in this case is the Rommel set from H&R. This consists of Rommel, 1 officer and 2 motor cycles. The other 3 figures are various command figures from their new Africa Korps range. You can see here the difference between the old figures (Rommel etc) and the new. Size increased and definite improvement in quality.

On the Workbench: ECW Royalist Redcoats

Further progress is being made on my ECW project with the completion of a redcoat regiment for the Royalists. 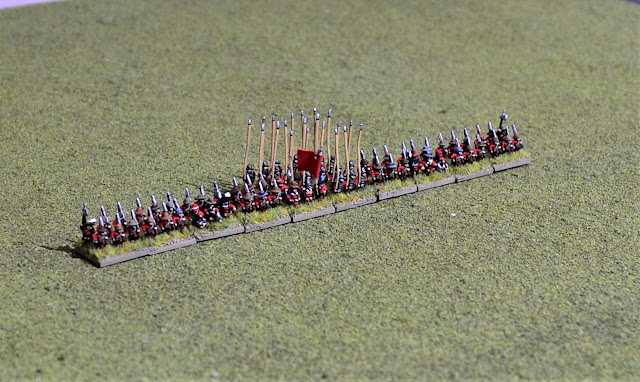 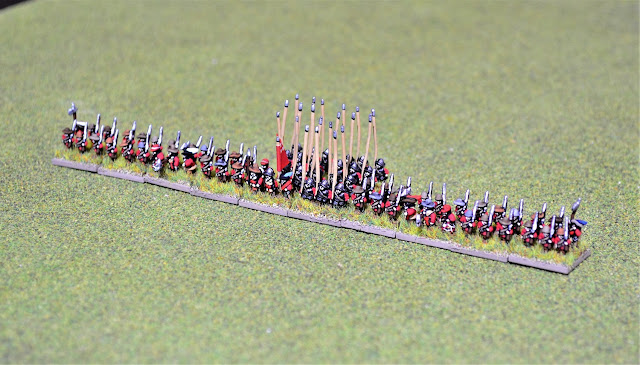 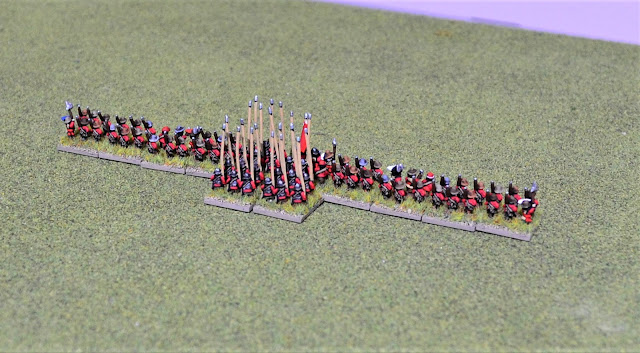 This is another large regiment with several more planned of this size. Figures are 6mm Baccus.

On the Workbench: Africa Korps, Brits and US.

In addition to trees, I completed various WW2 units primarily for the Op Nostalgia campaign - 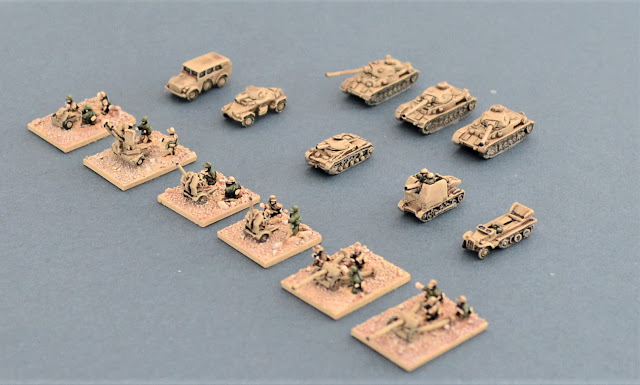 This almost completes the Africa Korps units for the invasion of Rhodes. All 1/300 Heroics & Ros. While the figures are excellent some of their vehicles and ARV's can be a little hit-or-miss. More of this later.

On the Workbench: Trees

The size of the Battle of Grissburg in my room was such that it was rather cramped at my painting table. That, combined with allocating time playing the battle, meant that painting and modelling has been restricted over the past month. I did though manage to complete a couple more 2mm Napoleonic bases and some 6mm for my WW2 campaign.

On the terrain front, aside from continuing to update my river sections, I felt something had to be done with my collection of trees. These are all the cheap variety from China which had been hastily based to get them on the table. Some are reasonable enough but others are pretty dire. The motivation to do something to improve them began with my pine trees which had been used on the Grissburg board. I avoided including them in my early photos as I had already decided to do something with them. They were caught in the distance in one shot - 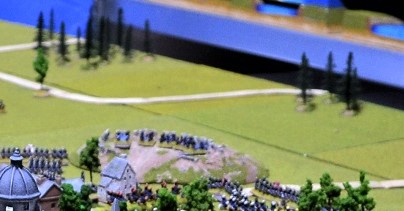 I apologise for the out of focus shot but you get the picture. They have also featured on previous 'On the Workbench' posts.

They are rather spindly affairs and once on the wargames board it was obvious that they would have to be replaced or modified in some way. A look around ebay and various online model shops revealed very nice but very expensive pine trees primarily for model railways.

Napoleon makes a decision to consolidate what has been captured rather than launch a pursuit. His forces are in need of a rest and some units may need to be reorganised after significant losses.

Blucher, reeling from the loss of his capital and his humiliating escape now has to ponder what he intends to do with what is left of his army. He lost almost half is force, either killed or captured, in the defence of Grissburg. The 5th and 14th Brigades have virtually ceased to exist. He also lost one of his best Brigade Generals and 7 regimental commanders. More units from the 2nd Corps will be mobilised the next day and Ziethen is en-route with the 1st Corps. His first task will be to regroup his dispersed forces and reorganise his battered Brigades.

Although a great victory, it was not entirely the knock-out blow the French had hoped for. The performance of the 3rd Corps was lamentable! The Prussian artillery deployed in the redoubts made it difficult for them but nevertheless they should have dealt with the inexperienced Prussians relatively easily. The 8th and 10th Divisions attacking the northern perimeter between the 2 redoubts broke through several times only to be summarily repulsed through determined Prussian counter-attacks.

A reminder of the current situation at the end of move 27: 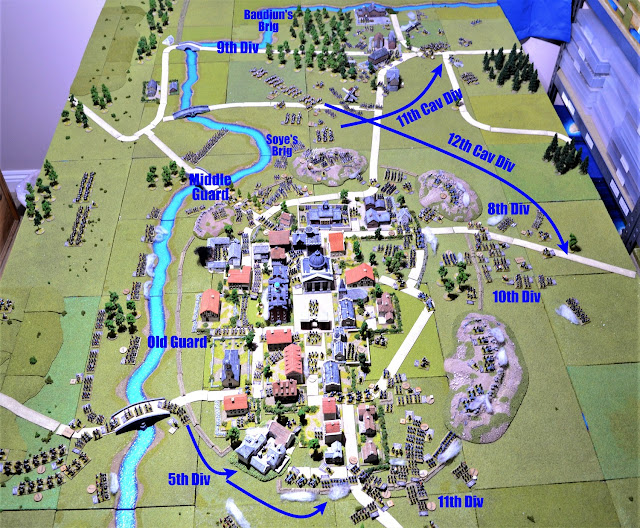 Before I return to the game, I thought I would expand a little more on how I am handling fighting in Grissburg. I am using the basics of Built Up Area melees as contained in General de Brigade but adding my own adjustments.

In the rules you designate a building, chateau, farm, village etc as being able to hold 25 or 50 figures. A town such as Grissburg would contain several 50 figure areas within it. I prefer to make it a little more detailed. Each building will be capable of containing a certain number of figures based on its footprint, number of floors etc. As my figures are based 6 to a base the limits for each building is divisible by 6. If the building has a courtyard, garden or space around it on its base, the capacity of that area is purely how many figure bases will fit in/on it.

I prefer to leave my building in situ and I therefore create a template of each building on which I will place figures. For Grissburg this is the current situation: 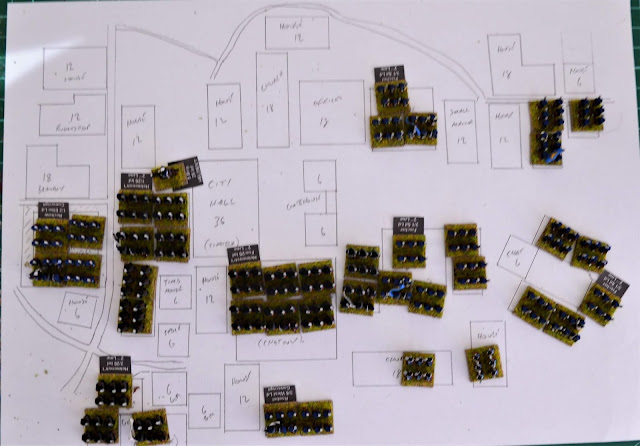