I often see questions on social media and various forums about solo wargaming and the best way to practice this aspect of the hobby. This is my take on solo wargaming based on experiences over the past 50 years.

Hopefully it will give wargamers who are considering this style of gaming, through either necessity or choice, some ideas and possibly encouragement. Many wargamers regard social interaction as an important part of the hobby and I have even heard one or two over the years imply that solo wargaming is somehow anti-social! As you will see from my wargaming history I have belonged to clubs and played in tournaments so fully understand the pleasure gained from having an opponent which have lead to many an exciting game. However, I now play almost entirely solo mainly through choice. I am not anti-social, merely that I find this is where I gain maximum enjoyment from the hobby. I will explain:

Even as a child when I acquired my first Airfix figures I was just as happy playing solo as with my friends. I would either be rolling marbles at them in the home or lobbing stones at soldiers hiding among the garden rockery imagining all manner of story lines quite often based on war films or westerns I had seen.

Throughout my wargaming life I have been just as happy playing solo or against an opponent. 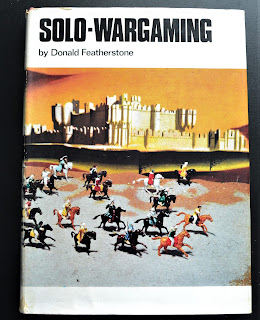 An early inspiration in the 1970's was a book by Don Featherstone, 'Solo-Wargaming'. It mainly covers the Colonial period and fired my imagination. Colonial itself is of course ideal for solo play with the hoards of Zulus/Pathans/Dervishers etc throwing themselves at your small regular contingent.

My own solo games rarely use an AI opponent, preferring to play both sides. I also do not get hung up on trying to find rules that cater for solo play. If I like the rules and they suit my style of gaming then I will use them.

Using imagination is the key. When deploying on the tabletop, I mentally blank off the enemy forces and deploy as appropriate for the terrain, the objective and the forces available. I will then do the same for the opposite side. You can never escape the fact that it will be as unpredictable as having an opponent but for me that is not a problem.

Playing a game is like watching a story unfold with dice rolls and command and control systems providing for unexpected events and outcomes. For springing ambushes or hiding troops, I move the opposing forces as you would expect them to move not knowing what awaits them. If they deploy scouts then it is a simple process of introducing dice rolls to determine if the hidden troops have been seen. Games can be just as exciting and thrilling as those with an opponent.

The overwhelming majority of my games are either campaign based or scenarios (mainly historical). Again for the campaigns I do not concern myself too much with the fact that I will know exactly who is deployed where on the map for both sides. Imagining what an aggressive Napoleon, a rash Ney or a Wellington would do and then translating that to the map.

For historical scenarios, the initial dispositions are normally specified for you. You can then choose to either replay as happened historically or try and rewrite history. With solo play you have total control and do not have to worry about whether an opponent agrees with you. 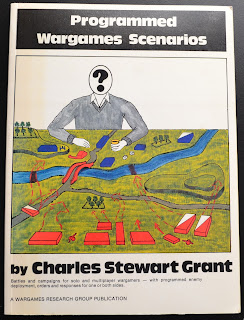 Another purchase which provides for a good number of scenarios suitable for solo wargaming with an AI opponent is 'Programmed Wargames Scenarios' by Charles Grant. A couple of campaign systems are also included.

I have played a few of the scenarios over the years using Napoleonics and they proved to be very enjoyable. If you prefer an AI opponent then I would recommend this book if you can get hold of a copy. I have seen it occasionally on ebay.


Some of the advantages of solo wargaming really come into their own if you have a dedicated wargames room, or at least a place where you are able to leave your tabletop set up for prolonged play. You may have seen through my blog that many of my games last several days, weeks or even, in the case of Waterloo, 2 months. It may be my age but I find after an hour or two of playing I feel I need a break which keeps the game fresh. That break maybe anything from a brief tea break to leaving the game for a day or two.

It also allows for very large games, perhaps using rules designed for a smaller level such as 'General de Brigade' for my Waterloo game using over 10,000 6mm figures, all based on small bases to allow for formation changes and casualties. That would never be practicable with an opponent unless multi-player in a much larger room. It makes the game that much more epic rather than using rules designed to complete such a game in 2-3 hours where the battalion, brigade or even division are mounted on single bases.

Another advantage of solo play is not being constrained with having to arrange a time to play. On occasions, if I have a spare half hour I will pop into the wargames room and complete a move, or even just one or two phases of a move. I make a simple note of where in the move I have arrived at to continue on my next visit.

Solo wargaming is actually quite liberating. You have complete freedom to chose whatever period, scale or rules to play, and if like me, you like tinkering introducing your own house rules to a particular set, the only person to become frustrated if you get it wrong is yourself.

There are of course disadvantages. The obvious being the lack of social interaction with other gamers (other than the internet) and you will need to collect and paint both sides.

So there you have it, my take on solo wargaming. Feel free to ask any questions you have on any of the blog posts where you will fine plenty of battle reports.