The Battle of Waterloo in 6mm Part 7

Please Note: This will be the last update before I go on holiday. I will be back on 2nd April raring to go! As it stands, I plan for this AAR to be in 10 parts plus a conclusion. The only proviso being that if one side or the other does not collapse before then!

The next turn generated a considerable amount of drama around the allied ridge to the west of the crossroads. I will therefore start with the Prussians and then work our way around the battlefield from the allied left. 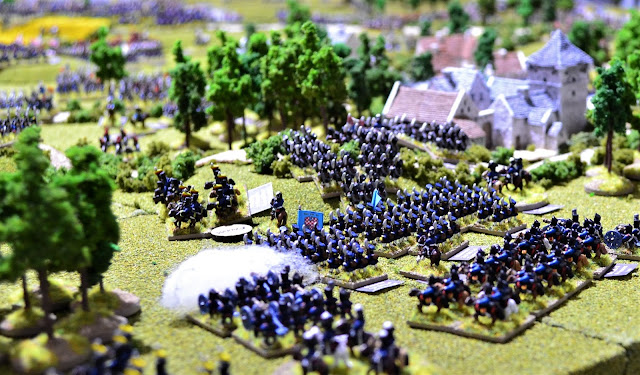 The Battle of Waterloo in 6mm Part 6

There was a lull in the action at 4.00pm as both sides sought to recover and reposition. There was activity on the Allied left flank where the French were continuing to attempt to exploit the weakness in the allied line. The 19th Division of 6th Corps also sought to consolidate it's position around Smohain and Papelotte in preparation of the arrival of the Prussians. 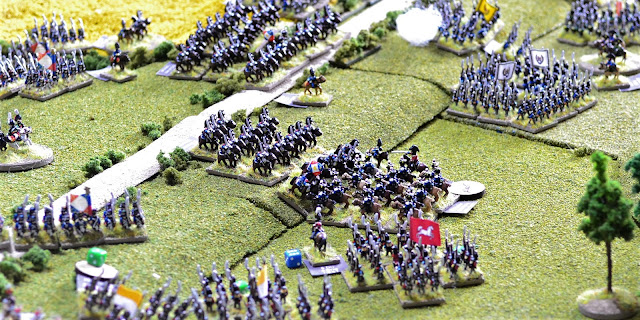 The Battle of Waterloo in 6mm Part 5

Napoleon is now having to re-evaluate how to break the allied line following the severe mauling of the 1st Corps at the hands of the Union Brigade. For the 1st Corps itself, the 1st, 3rd and 4th Divisions are still in reasonable condition. It is Donzelot's 2nd Division that has suffered the most being reduced to just 2 battalions. With the 1st and 4th Divisions heavily committed on both wings of the 1st Corps there is not a great deal that can be achieved with just Marcognet's 3rd Division.

He decides to focus his main effort on the allied right. Foy and Bachelu's Divisions supported by the Middle Guard will make a full frontal assault. They will be further supported by the 3rd Cavalry Corps, the Guard Heavy Cavalry and Pire's Light Cavalry Division. Jerome Napoleon's Division will continue to assault Hougoumont. There is a risk with only the Old Guard and the Light Cavalry of the Guard providing the reserve. With the imminent arrival of the Prussians though he needed to break the allies as quickly as possible. 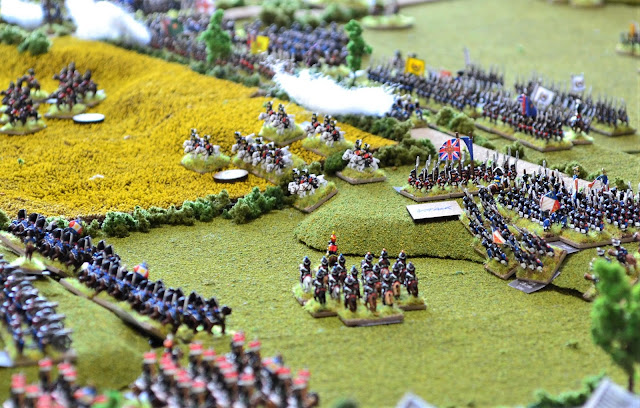 On the French right, Bruno with the 3rd Chasseurs (middle of photo) were able to conduct half a charge move with their 'Superb Discipline' result in the previous turn's Pursuit Test. They used this to close the gap on the Scots Greys bringing them into charge range.