This was the second action I played in my project to work through the WW2 in North Africa from The First Battle of Solum. Whether I will ever get to complete it is another matter but it will be fun trying!

After the Battle of Sollum on 15 September 1940 the Italians pressed into Egypt, advancing 60 miles in 3 days. Halting at Sidi Barrani, the Italians dug in to await supplies and reinforcements. The British are planning to exploit the Italian's lack of mobility and preparations are underway for an attack.

In the meantime the British harass the Italians with a new tactic of using mixed formations called Jock columns, named after the officer who was an exponent of the tactic and may have conceived it originally, Lt Col "Jock" Campbell. A Jock column normally consisted of a single motorised company of infantry, a battery of field guns, support weapons and some armour or armoured cars.


British Victory Conditions
Objective 1 - destroy the supply convoy (66%+)
Objective 2 - maintain your forces for future operations. Must not lose more than 33% of force
Lose both of the brand new 25 pdrs and the British lose irrespective of other results.


The Italians have built 6 fortified camps in front of Sidi Barrani and are in a strong position to hold off British forces. Supply columns are being attacked by British troops.

This action sees one such supply convoy. The convoy is commanded by a Supply Major who is nervous about attacks as his previous convoy was largely destroyed. An escorting force is commanded by an officer junior in rank. The Supply Major uses his rank to force the junior officer to keep all his forces within 6" of the convoy. If the convoy is attacked, the escorting force commander will be able to act independently and also take control of the convoy to achieve the Italian objectives.

Italian Victory Conditions
Get 50% of supply trucks trucks through to the other end of the board.
If attacked a call can be made for air support. After a random number of turns air support will arrive. However, there are only 3 radios which can be used to call in this air support. Infantry Commander, L33 Commander and the convoy commander in his car. If all 3 are destroyed no air support can be called in. 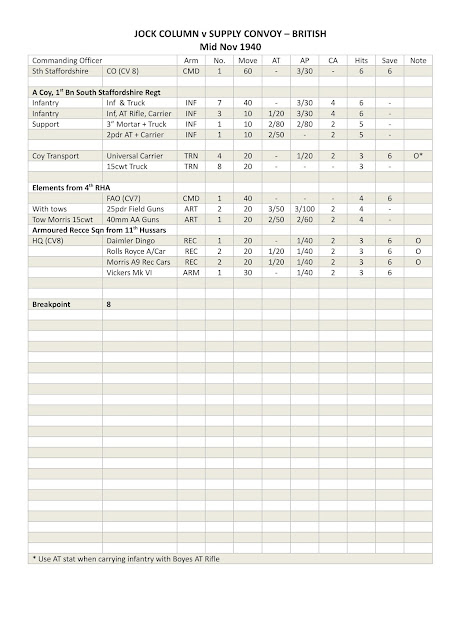 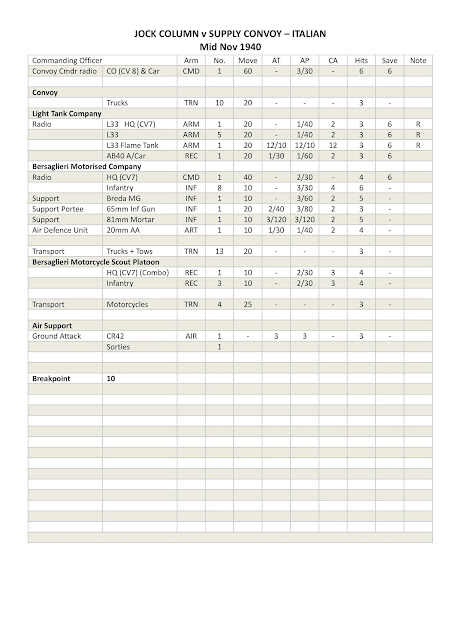 The Italian convoy with the Bersaglieri motor cycle scout platoon screening ahead of the main column. The light tank company covers the flanks with their L33 tankettes. In the foreground (bottom right) British infantry is dug in and ready to spring their ambush (currently treated as out of view). Likewise a dug in 2pdr anti-tank gun readies to open fire (top left).

A closer view of the column with the 2pdr in the background.

Various escorting units are scattered through the convoy. 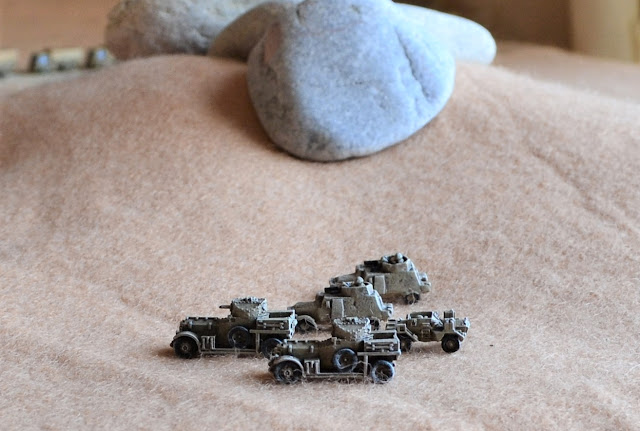 The armoured cars from the 11th Hussars armoured recce squadron hide from view ready to charge out and into the flank of the convoy.

The Staffordshire Regiment's transport is positioned out of harm's way and ready if needed. To their front are the two deployed 25pdr field guns.

British infantry support weapons, 40mm AA gun, and to the right, the Vickers MkVI light tank of the 11th Hussars wait to open up on the lead elements of the Italian convoy. 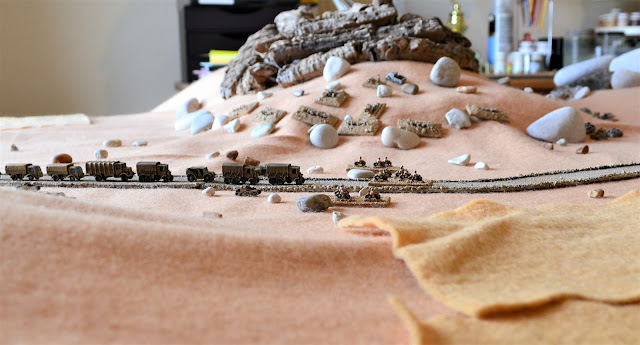 Not long now! The lighter coloured felt on the bottom right of the photo denotes soft sand. 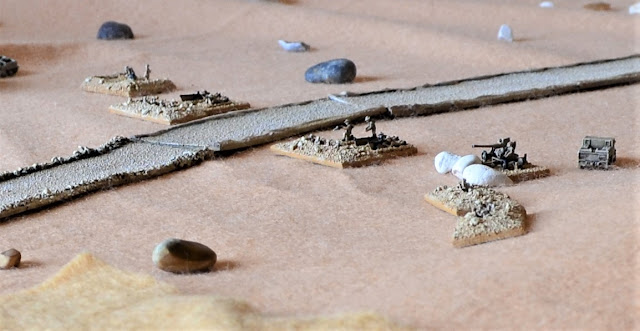 Another view of the support weapons. I placed stands containing the support weapons, in this instance 2 anti tank rifles, behind the dug-in positions to remind me of what is in the foxhole. Having taken the trouble of making the foxholes containing troops (in this case H&R infantry with their legs cut off!) I am not sure about the aesthetics of doing this. I may need to rethink how I depict dug-in troops in the future. 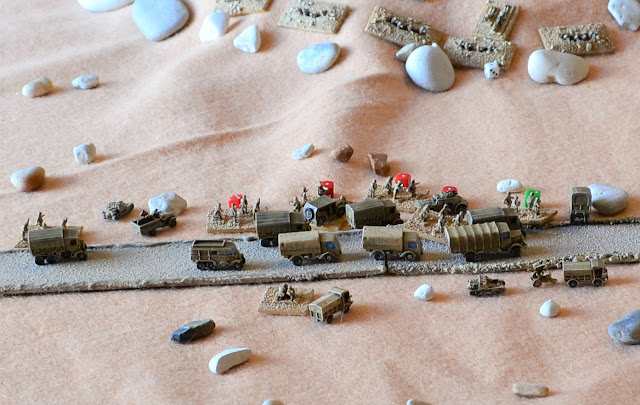 The dug-in Staffordshires with an anti-tank rifle pour fire onto the convoy. 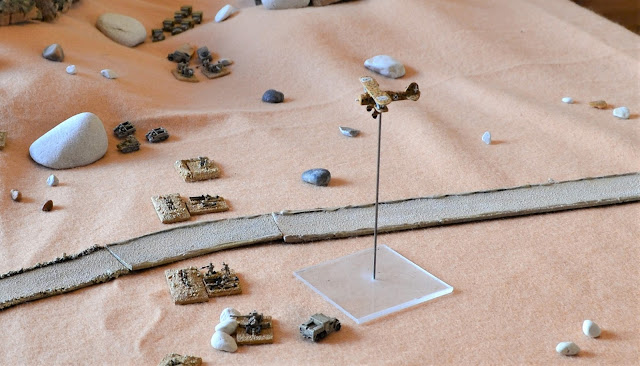 The Italians successfully put out a call for air support which arrived very quickly, but unfortunately for them it proved to have little effect. 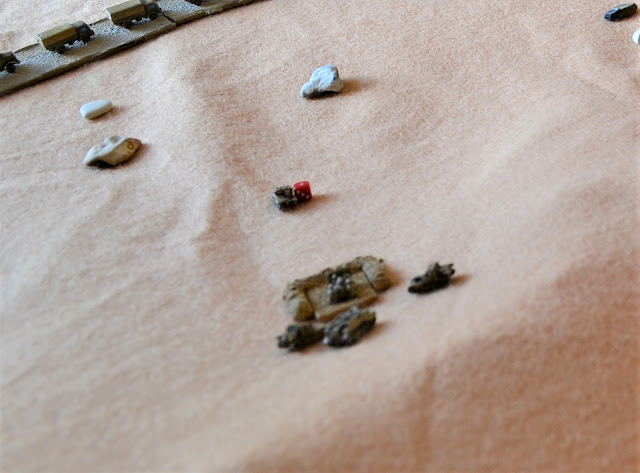 3 x L33 Tankettes attack the 2pdr position. The latter opens fire but only manages to suppress one before being overrun. 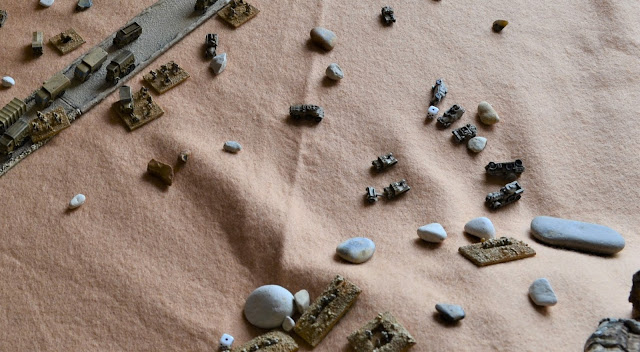 The 11th Hussars were very slow to make their move and when they did eventually approach the convoy their armoured cars ran into the L33 Flame Tank as well as other units suffering heavy losses in the process. 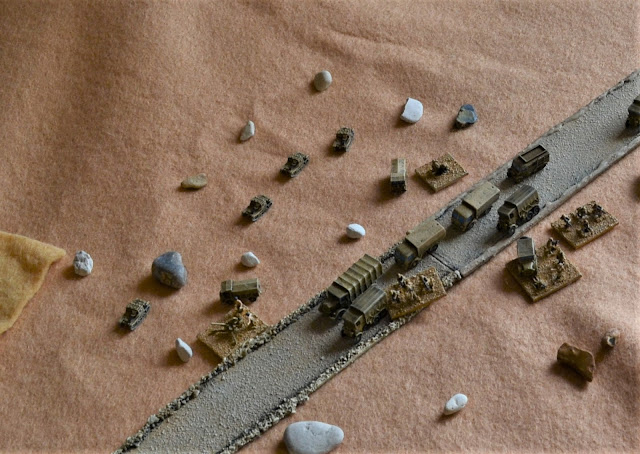 Having dealt with the 2pdr, the L33's return to the head of the column to try and force a way through the British positions. The Bersaglieri motor cycle platoon has by now been pretty much wiped out. 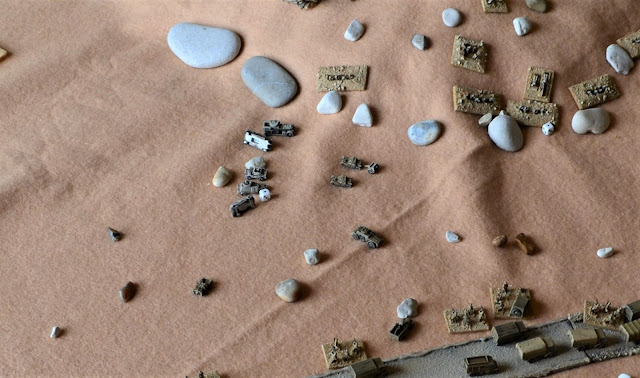 In the foreground the Italian infantry continue to exchange fire with the dug-in British infantry. 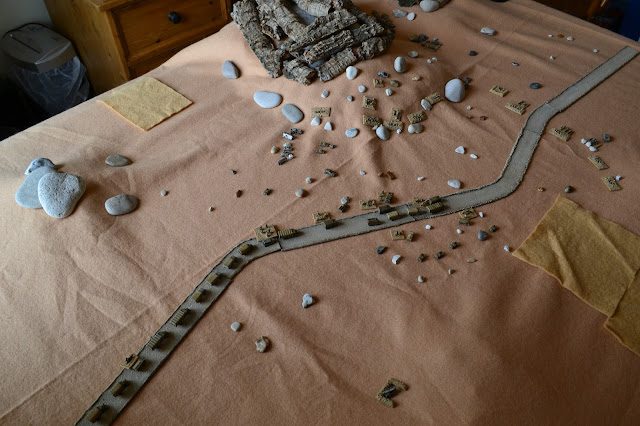 The overall view reveals how much little headway the convoy has made breaking through the British lines despite some successes. The Italians though realise that to have any chance of getting the convoy through they cannot afford to delay and be picked off. With the L33's in the lead they charge towards the British defensive line spanning the road. As they do the convoy comes under fire including from re-sited 25pdr field guns. Several trucks are destroyed. 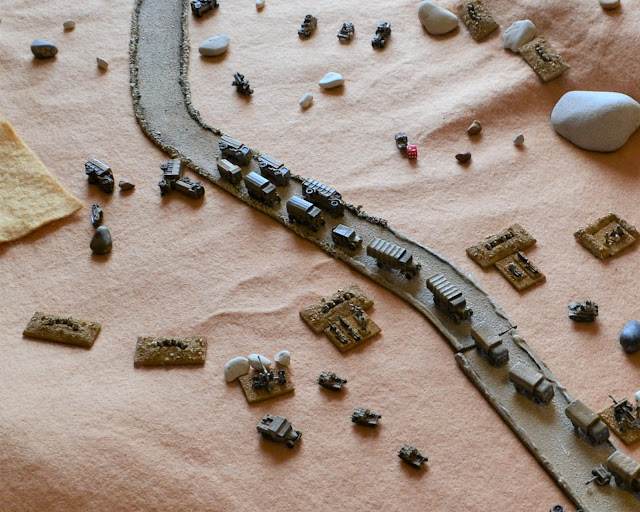 The Italian charge appears to be paying off as they pass the British line. 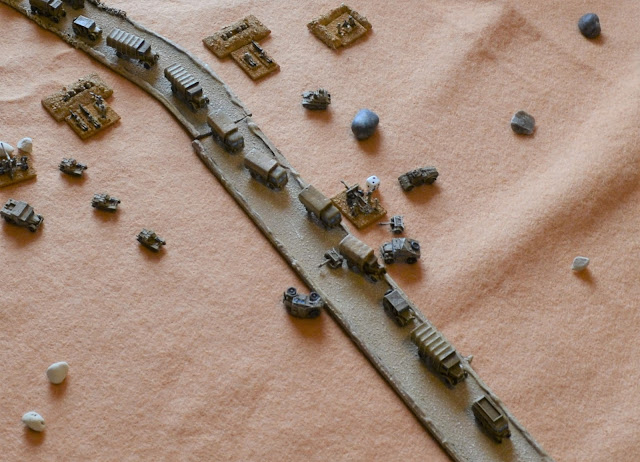 One 25pdr is destroyed and the second is fired on by the AB40 armoured car. 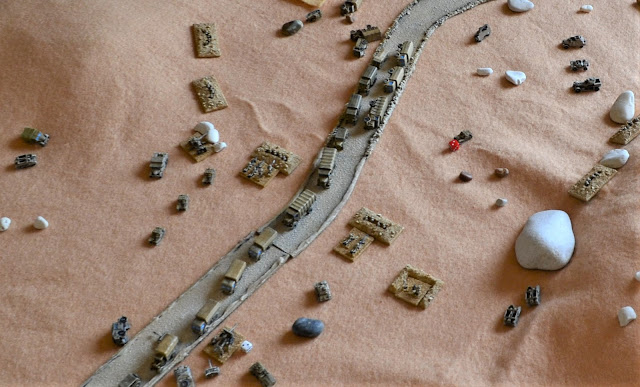 Italian losses continue to mount as the surviving armoured cars of the 11th Hussars fire on the rear of the convoy. The goal was in sight for the Italians but frustratingly for them their losses became critical. 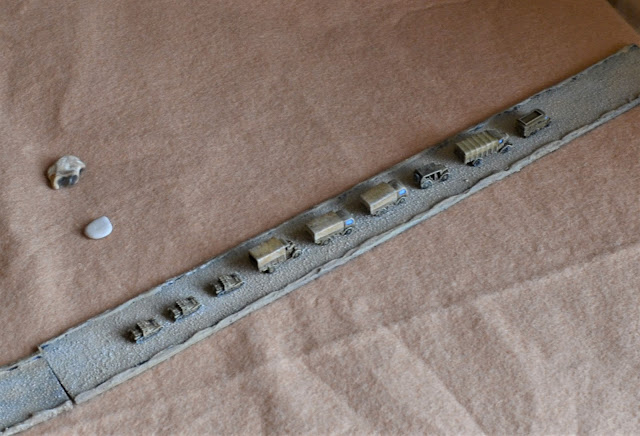 Italian morale collapsed and all surviving units decided retreat was the only option left for them. Here is what is left of the convoy heading back the way it had come.

Although a British victory by inflicting more than 66% casualties on the convoy, it was very close for them. They lost almost 30% of their force and one of the two 25pdrs.