It is my intention to work through the Fire & Fury Scenario books including the Regimental versions, and also the scenario books written for the Guns at Gettysburg Rules by Dave Brown. As with the Napoleonics these will be 6mm figures from the Baccus Miniatures range.

The Napoleonic Command and Control system has been use but slightly reworked for ACW. Similarly, adjustments were made to reflect the fact that each unit is a brigade rather than a single battalion for the brigade level F&F scenarios.

This particular battle was taken from the Guns at Gettysburg Scenarios book 4. 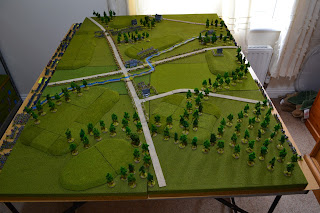 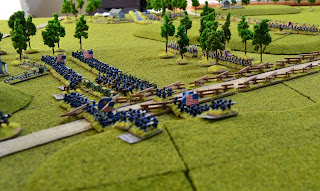 Burnside's Brigade in the foreground engages the much smaller Evans' Brigade occupying the wood at the base of Buck Hill. Bee's Brigade climbs the slopes of Buck Hill to support Evans. 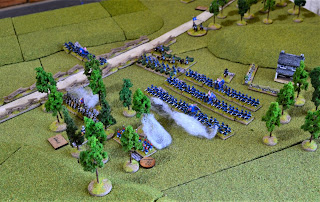 Burnside's Brigade prepares to drive Evans' Brigade from the wood preparatory to an attack on Stone House. 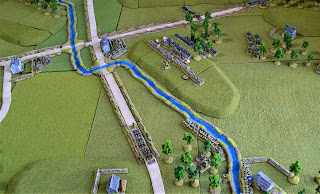 Burnside's Brigade drives Evans clear of the wood and up onto Buck Hill which is occupied by the 2nd Mississippi and 6th Nth Carolina battalions of Bee's Brigade with the 4th Alabama defending Stone House. Hampton's Legion hurries along Warrenton Turnpike to reinforce Bee.

Bee's Brigade has been driven off Buck Hill and now forms a defensive line behind Young's Branch. In the foreground, Jackson's Brigade advances to reinforce the faltering Confederate line. In the background can be seen Sherman's Union Brigade marching along Farm Road blissfully unaware of what is happening to their left. 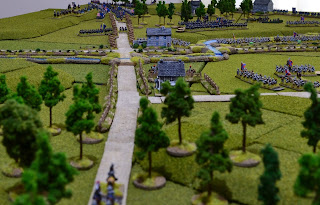 Porter's and Franklin's Union Brigades pour along the Sudley Road towards the hapless Confederates holding the crucial Stone House.

Hampton's Legion forms up behind  the fence on Warrenton Turnpike as Beauregard looks on. 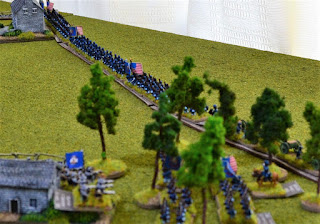 A closer view of Sherman's Brigade enjoying their ramble along Farm Road. Many of the rank and file become increasingly alarmed by the sound of gunfire to their left but what the hell do they know. Tyler and Sherman clearly know what they are doing!

McDowell looks on as Porter's Brigade continues to flood onto the battlefield with Franklin's Brigade arriving to their left. In the background can be seen the Divisional commander Tyler confidently leading Sherman in the wrong direction. 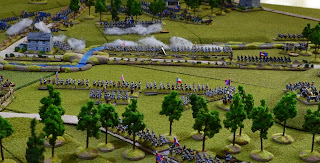 Bee's Brigade exchanges fire with Burnside's Brigade as Jackson deploys his battalions in line. Cocke's Brigade advances to support Jackson in the foreground.

A furious exchange of fire between Burnside and Bee continues and casualties mount. Burnside however is anxious to get his Brigade moving to capture the crossroads at Stone House but his green inexperienced troops wilt under the relentless volleys from the rebels.

Jackson's Brigade continues to extend his line as more and more of his troops arrive.

Union forces continue to stream along the Sudley Road with the additional arrival of Wilcox's Brigade.

The fierce exchange of fire continues creating a cloud of smoke between Bee's and Burnside's Brigades. 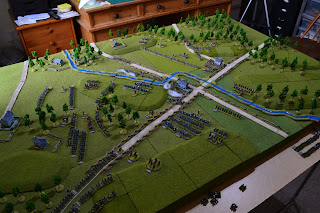 An overview of the battle as the Union forces arrive leaving the Confederate position looking increasingly untenable. 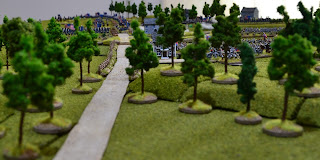 The view along Sudley Road from the Confederate position. 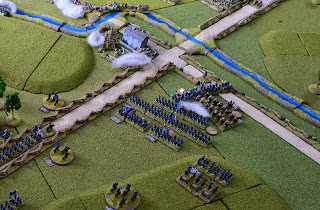 The 1st Virginia Cavalry, having completely destroyed Palmer's Union regiment, launched themselves into an uncontrolled charge towards the nearest Union troops, much to the horror of Stuart who frantically tried to recall them. The 8th New York Militia of Porter's Brigade who had already wheeled in  preparation for an assault on the Stone House suddenly became aware of Confederate cavalry at full gallop to their rear. It was left to the green troops of the 14th Brooklyn to halt the charge or face annihilation. Fortunately for them a Union artillery battery deployed on Dogon Ridge saw the threat and sited their guns. The 14th Brooklyn faltered at the sight of the rampaging rebel cavalry with their NCO's and officers frantically calling out to them to hold steady. The close presence of the Union battalion prevented the artillery from using canister but their use of shot at close range, combined with a ragged volley from the 14th Brooklyn, proved to be enough. Numerous rebel troopers fell leaving the charge in tatters. Stuart looked on in horror as his regiment faltered in the face of infantry and artillery with complete annihilation in prospect. 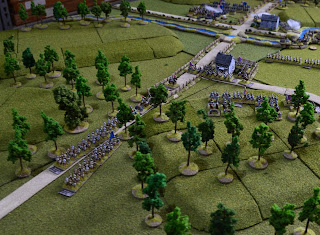 Bonham's Confederate Brigade arrives along the Sudley Road and races towards the vulnerable left flank. Cocke's Brigade occupies the area around Henry House and thus further stabilising that left flank.

An overview of the battlefield from behind the Confederate lines. The Union army has failed to make a breakthrough and time is running out for them as more Confederate reinforcements arrive. With the attack in the centre stalled, Union attention switched to the flanks.

Over on the Confederate right, Bartow managed to see off the threat from Keyes' Brigade but then was forcefully ejected from Lewis House by Franklyn's Brigade. Bartow's troops had suffered heavily and he realised that he was in danger of being destroyed by the increasing number of Union forces. He therefore fell back on Robinson House and formed a defensive line. Here can be seen Wilcox's Brigade advancing in column towards the rear of Franklin's line. In the background, Sherman's Brigade finally arrives where it should be together with Howard's Brigade. 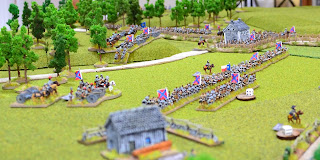 The Confederate centre, having successfully withstood the initial assault, are acutely aware of a second wave of Union troops building in the distance.

Another view of the battlefield towards the Confederate right flank and Robinson House in the distance.

Howard's Brigade to the left, and Sherman's Brigade advance towards the centre and right respectively.

The remnants of Stuart's Cavalry take shelter behind the woods on Chinn Ridge as the Confederate left flank looks considerably more secure.

Sherman's Brigade deploys ready to assault the Stone House and Confederate centre. The 4th Alabama who have repulsed all challenges, still doggedly hold on to the Stone House. 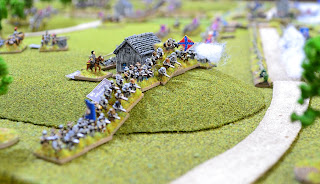 Jackson's Brigade moves into the front line relieving the exhausted regiments of Bee's Brigade and the Hampton Legion.

The 4th Alabama is finally repulsed from the Stone House but all may be too late for the Union forces as Stuart waves on the impending Confederate counter-attack.

As the Confederate left advances to attack the Union right, Sherman's and Howard's Brigades build pressure on the Confederate centre, and in the distance, Franklin and Wilcox's Brigades are met with volley fire as they assault the area around Robinson House.

Porter's Brigade opens up on the Confederate left as they launch their assault. 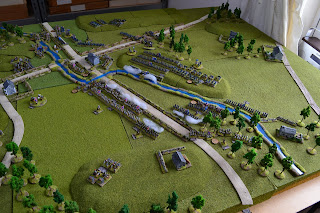 Here we see that Bartow has counter-attacked on the Confederate right and driven into the flanks of the Union Brigades. The Confederate left is gaining ground steadily breaking up Porter's Brigade. More Confederate units attack the Stone House. 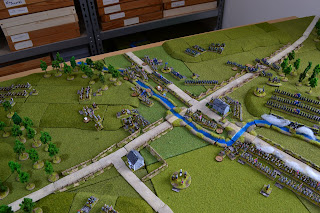 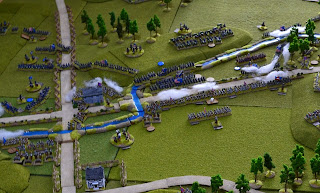 Howard's Brigade launches its assault across Young's Branch but comes under withering fire from the Stonewall Brigade.

The Union line looks increasingly threadbare as it comes under pressure all along its front. The last hope for the Union lay with Howard's assault but that also stalled under the relentless volleys from Jackson's Brigade. 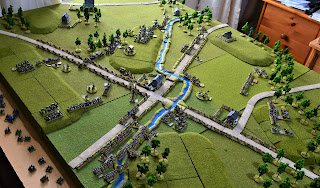 The final position at the end of the battle. Confederate counter-attacks destroyed Sherman and Howard's Brigades most of whom fled the field. Jackson's Brigade swung around to outflank what was left of Porter's Brigade. It was clear to McDowell that his only hope was to order a general retreat and preserve as many of his units as he could.

This was a highly enjoyable battle to play and could have gone either way for much of the game. The Union's failure however, was to make that early breakthrough when it had a clear advantage in numbers. Part of its problem was the failure of Green troops to engage when ordered together with an element of poor generalship leading to difficult command and control. The end result being uncoordinated attacks although the Confederates were not entirely immune from this problem either.
Posted by Jon Bleasdale at 20:32