The Battle of Waterloo in 6mm Part 10

The call by Blucher for all commanders to attack and stressing the urgency in which his orders should be carried out received a boost early in the turn. The Prussians won the initiative and nearly all commanders passed their command and control tests. With much of the French now pulled back to their new defensive line, opportunities arose for Tactical Marches by several formations. 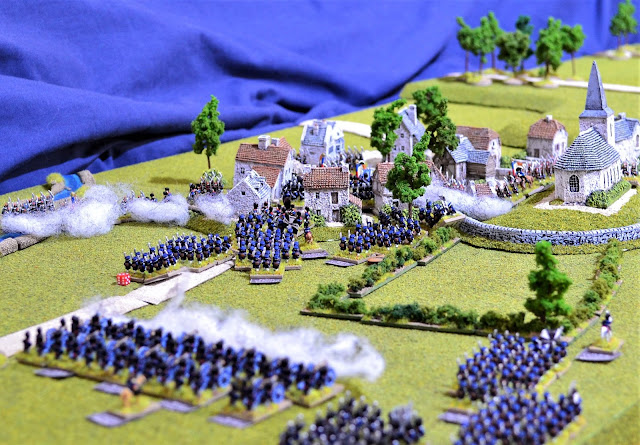 At Plancenoit, Pewels ordered his 3 battalions of 2nd Pomerania Landwehr to attack the village (middle of photo). The 3rd battalion on the left had just recovered from falter when it came under fire from the 1/1st Volitgeurs and a half battery of Guard artillery. It suffered a further 4 casualties generating a morale test which it passed.

The 2nd battalion lead by Pewels himself attacked the half Guard battery at the main entrance to the village. The French guns fired a salvo of canister at the Prussian battalion inflicting 3 casualties. They charged home and bayoneted the crews wiping them out completely for no loss.

The 1st battalion on the right charged group of Young Guard defending the perimeter of Plancenoit but halted when it came under fire from them and also from an adjacent building.

Continued
Within Plancenoit itself the melee continued between the Prussian 2/11th Infantry and two battalions of Young Guard. With no support the Prussians found themselves outnumbered and outfought by the Young Guard. They were forced to retreat losing 8 casualties to the French 2. 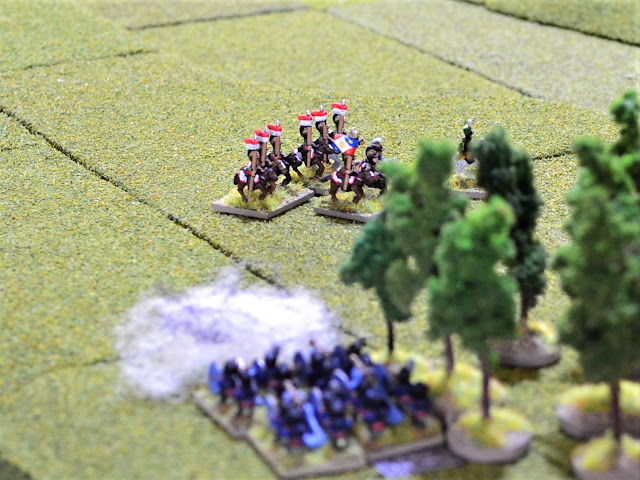 The French 1st Lancers had lingered too long in their position. They were about to retire when the found themselves targeted by 3 Prussian batteries, one of which was in canister range. The result was devastating with 9 casualties suffered. The photo shows what was left just before they dispersed. This was the last of the French 5th Cavalry Division commanded by Subervie and attached to the 6th Corps. 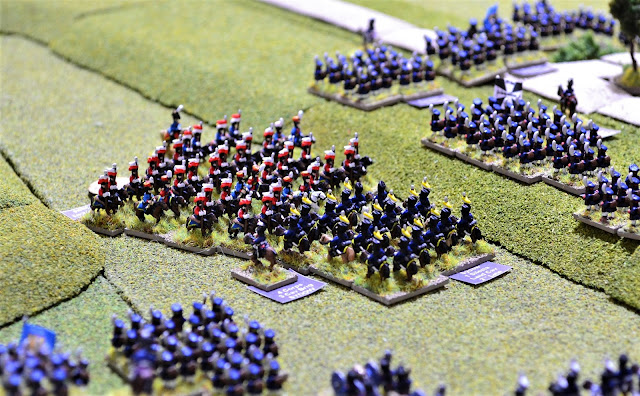 Sydow saw that the 2nd Lancers of the Guard were unformed and he had a cavalry unit within charge reach. The Prussians needed to clear this French unit from their lines as it had caused them serious difficulties and crucially prevented their advance in this sector. He lead the 1st Silesia Landwehr Cavalry in a charge towards the French Lancers. Critically the passed their charge home test and they ripped into the Lancers. The French cavalry, who had been supremely confident of their abilities and had no reason to doubt they would see off these inexperienced troopers, were shocked at the ferocity and determination of the charge. The elated Prussians overturned the Lancers who were forced to retreat. Each side lost 4 casualties with the Landwehr maintaining superb discipline.

As the new French position formed, more of it's artillery batteries were deployed and ready to fire. Although at this stage they were long range shots, they nevertheless made life uncomfortable for lead Prussian units.

An overview of the Prussian centre as they push out towards the French line. 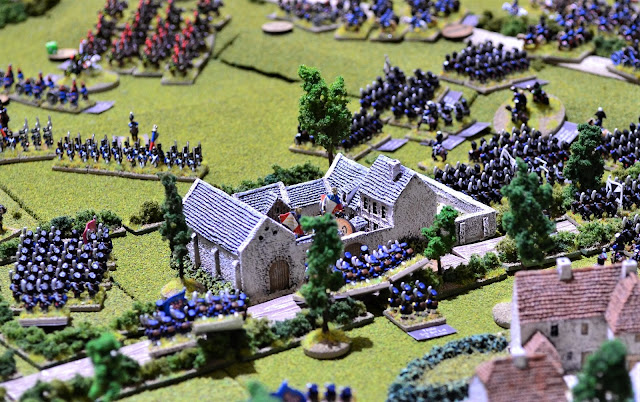 The melee at Papelotte continued with the 3/3rd Silesia Landwehr lead by Thile fighting a desperate action at the main gate and across the courtyard walls. They finally manage to fight their way in pushing back the 4 companies of the 85th Line and inflicting 3 casualties for the loss of 1. 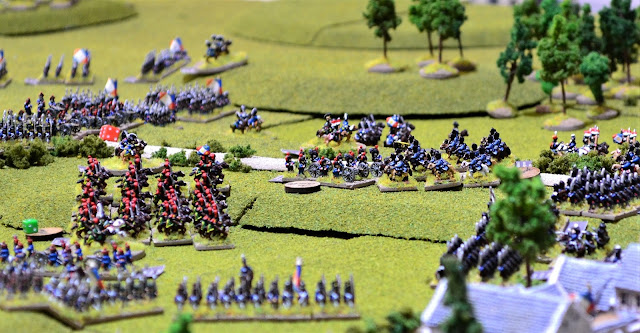 The French Chasseurs of the Guard (middle left of photo) retreated through a deployed battery of it's own Guard Horse Artillery unforming it. The pursuing Prussian 5th Dragoons struck the battery and sabred the crews (middle of photo). The 5th Dragoons had every reason to feel proud of themselves. They would now have to retire with blown horses. 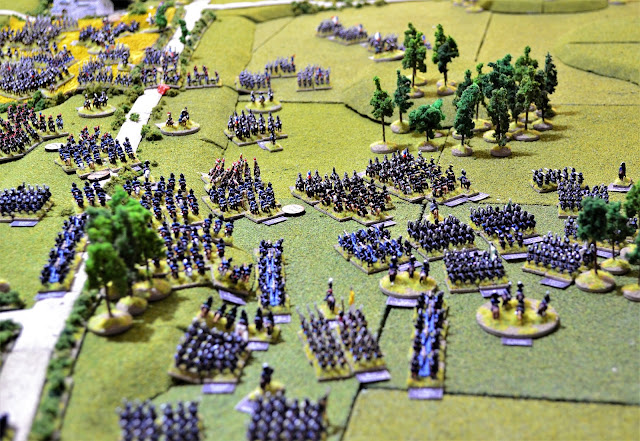 An overview of the Prussian right flank shows formations finally making headway. They do however, need to deal with French cavalry who were seeking to block their advance. 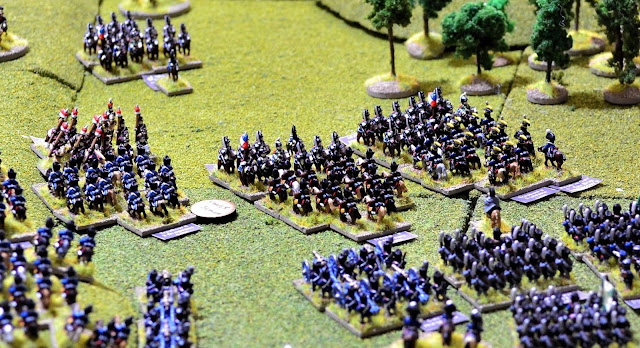 Zooming in on the cavalry action. Treskow ordered 2 of his cavalry regiments to charge Traver's Cuirassiers Brigade. The Prussian 4th Hussars (middle of photo) charged the 7th Cuirassiers who counter-charged lead by Travers. Treskow lead the 3rd Uhlans into the counter-charging 12th Cuirassiers (middle right). On the left of the photo the 2nd Dragoons, who now had blown horses following the melee with the Chasseurs of the Guard, were charged by the 4th Lancers lead by Gobrecht.

The Prussian cavalry successes elsewhere were alas not to be repeated here. Starting from the left. The 4th Lancers hit the unformed 2nd Dragoons pushing them back with 1 casualty inflicted on each side. The Lancers maintained superb discipline.

In the centre, the 7th Cuirassiers easily defeated the 4th Hussars causing them to retreat. Again only 1 casualty suffered on each side. The Cuirassiers horses were blown.

On the right the Uhlans met the same fate being forced to retreat by the victorious 12th Cuirassiers. The French lost 1 to the Uhlans 2 and they would pursue in the next turn.

Fortunately for the Prussians the French cavalry units were weak in numbers hence the light casualty rate. 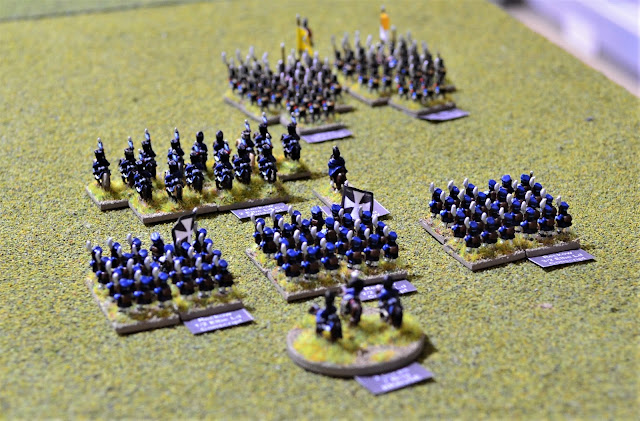 An overview of the Prussian right and centre.

Another view of the French line which is close to completion.

The overall situation at the end of the turn.

This had been a good turn for the Prussians having lost no units. The French however, lost the equivalent of 4 leaving them with 13 more before the Army Break Test point.

The next turn saw the Prussians throwing everything forward with most commanders passing their command and control tests.

In Plancenoit the 14th Brigade prepared for another attempt on the village. The massed batteries of Prussian artillery pounded the church killing 2 more occupants.

Pewel's rolled a 'Hold' result in his command test. Unfortunately this placed the 3 battalions of the 2nd Pomeranian Landwehr in range of intensive musket and artillery fire from Plancenoit. The 1/2nd Pomerania (bottom right) received fire from the building and gardens nearby losing 3 casualties. The 3/2nd Pomerania (middle of photo) came under canister fire from 2 guns and a particularly accurate volley of musketry from the 1/1st Voltigeurs of the Young Guard (they rolled a double '6'). They had fired at long range so casualties were reduced but they nevertheless suffered a total of 5 casualties. The double '6' caused them to falter but Pewels escaped injury.

The Prussians threw everything forward and this is particularly apparent in the centre. There was a price to pay however. 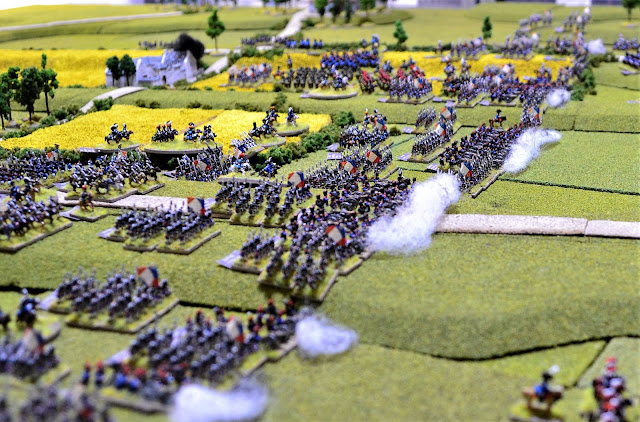 The massed French artillery batteries poured salvos of shot into the massed columns.

Zooming in on the Prussian central columns illustrates the difficulties the Prussians face. 3 of the 4 leading battalions were fired on by 4 artillery batteries. Working from left to right:

The two lead battalions on the high ground to the right are Fischer's 2nd and 3rd battalions of the 1st Silesian Landwehr. They were pounded by the 3 x 12pdr batteries of the Guard and a horse artillery battery. They suffered 3 and 4 casualties respectively which required them to take morale tests. They also retreated and again the Brigade test failed with both battalions dispersing. Virtually the whole front line columns in the Prussian centre had now gone.

A further disappointment for the Prussians was the charge of the 2/10th Infantry on Brue's 1/95th Line (top left of photo). The 1/95th inflicted 2 casualties on the Prussians as they charged. The 2/10th suffered a morale failure and retreated.

The Prussian 2nd Corps make progress past Papelotte which has now been captured by Thile. The 2 depleted battalions of the 85th Line (middle of photo) who were now retreating having evacuated Papelotte, faced destruction by Cardell's 2nd Infantry Regiment (adjacent to 85th in photo). Cardell was one of the few commanders to fail his command test and he was compelled to hold. Clearly he saw something nobody else did! The 85th could continue retreating unmolested. 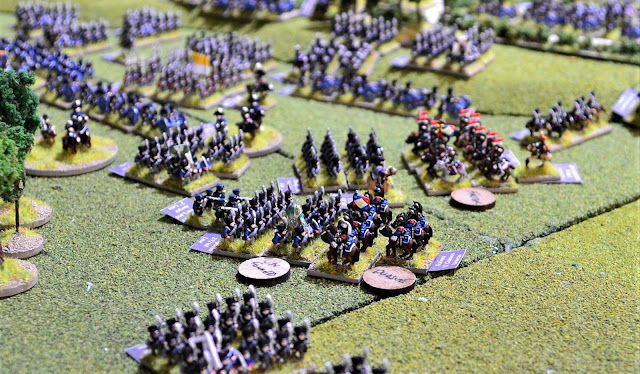 The 12th Cuirassiers (lower middle of photo) pursued the Prussian 3rd Uhlans who had retreated through the 2/12th Line of Othegraven's regiment. The battalion was now unformed as the Cuirassiers ploughed into it. The Prussians excelled themselves and managed to repulse the Cuirassiers inflicting 2 casualties for no loss.

Just above the Cuirassiers in the photo are the 4th Lancers. They charged the Fusilier battalion of the 12th Line but failed to charge home and faltered. 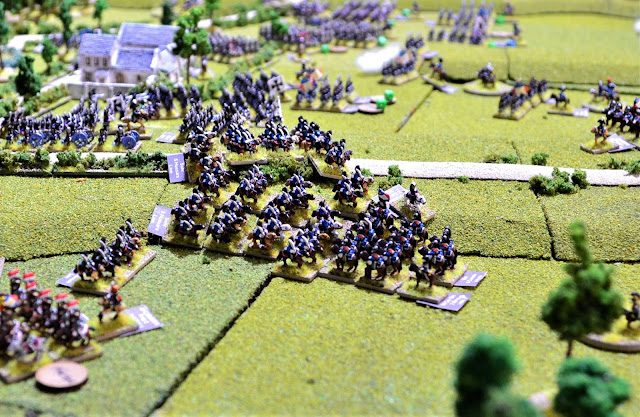 The 6th Cuirassiers charged Sohr's 3rd Hussars who counter-charged lead by Sohr himself. The tiring Cuirassiers were emphatically defeated by the Hussars losing 6 to the Prussians 1. This was enough to disperse the Cuirassiers.

Elsewhere the Prussian 2/11th Infantry battalion failed to rally near Plancenoit and dispersed. 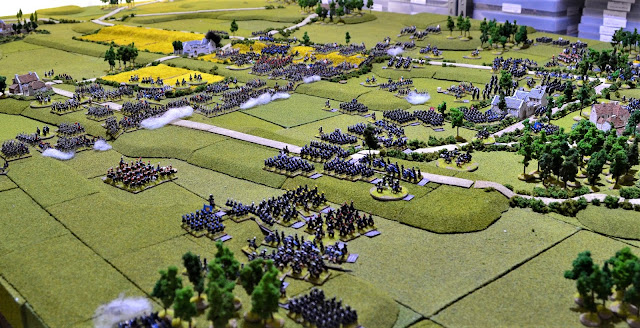 Two views at the end of the turn.

The Prussians lost 5 units this turn to the French 1. The time is now 8.30pm and a realisation was creeping over Blucher that his gamble had failed. The ease in which his lead battalions in the centre of his attack were swept away by the French indicated the pointless loss of life his troops would suffer if he continued to attack in this way. He needed to build his attack formations and soften up the French with his own artillery. He simply did not have the time to do this. He reluctantly gave the order to disengage and begin his own retreat.

The French looked on as the Prussians gradually pulled back. They had done it! 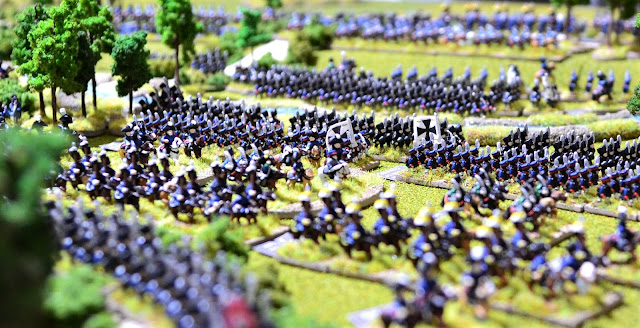 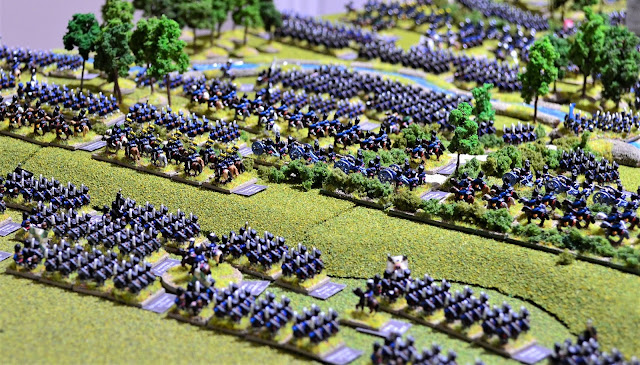 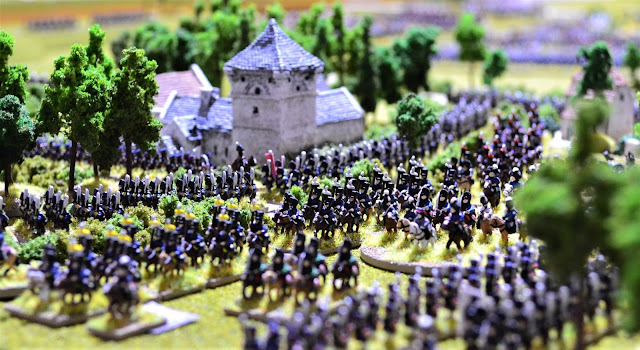 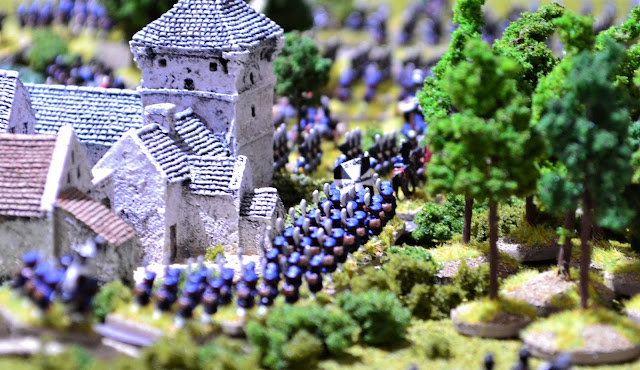 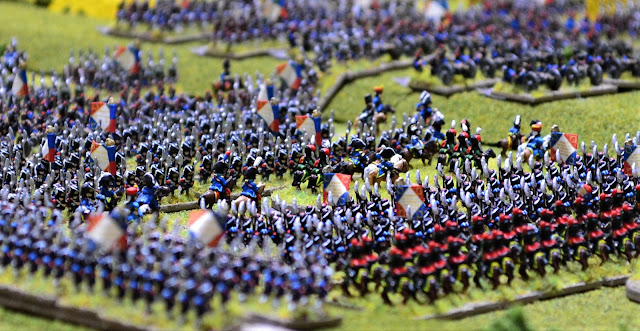 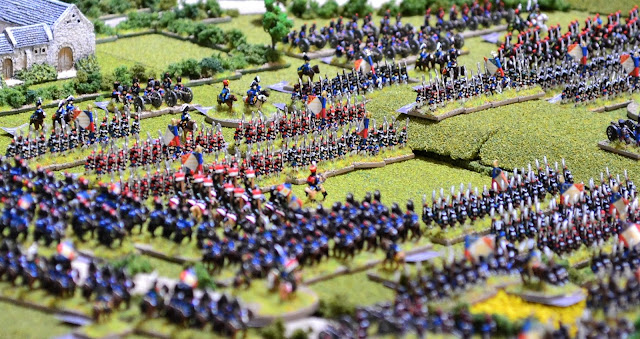 6 months later, French 1st Corps Brigade commanders, Schmitz, Aulard and Grenier visit the battlefield. They will shortly be rejoining their Brigades for Napoleon's next campaign. The invasion of??? - 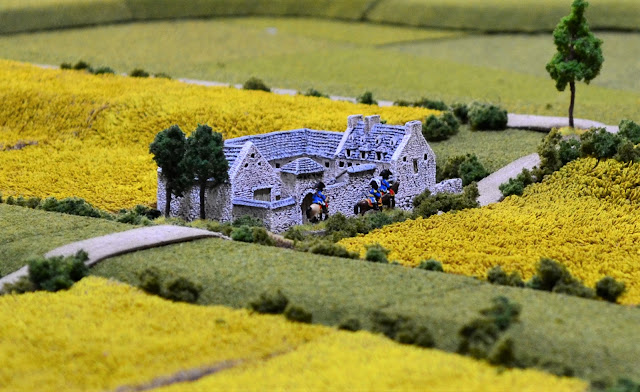 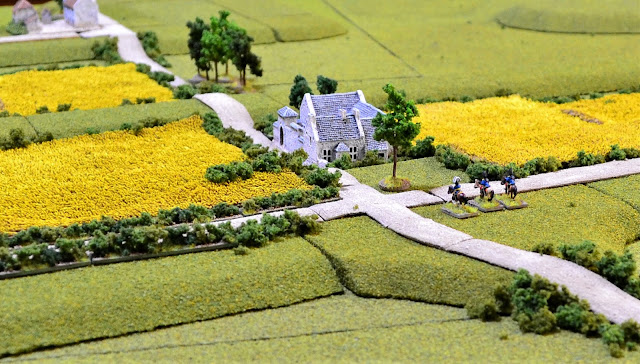 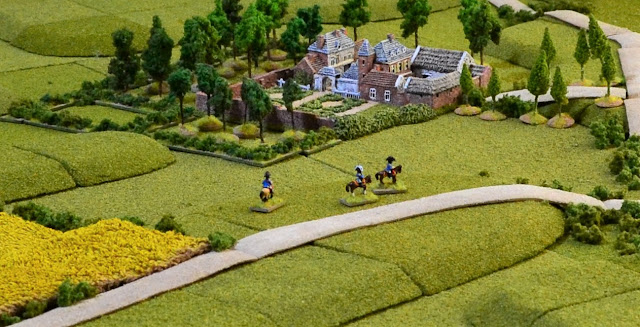 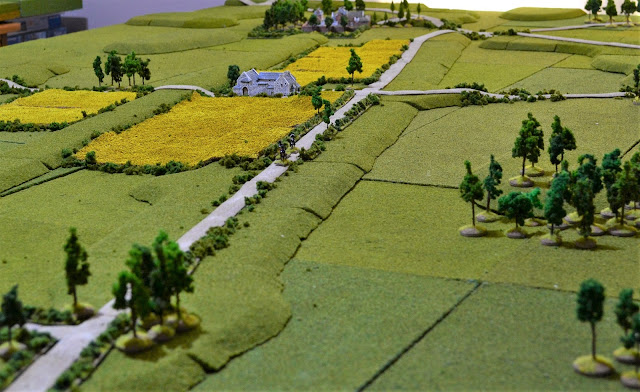 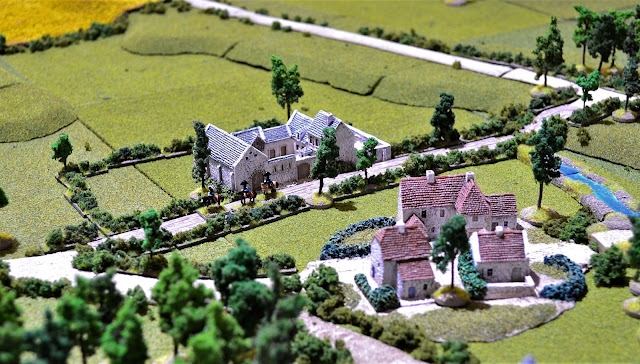 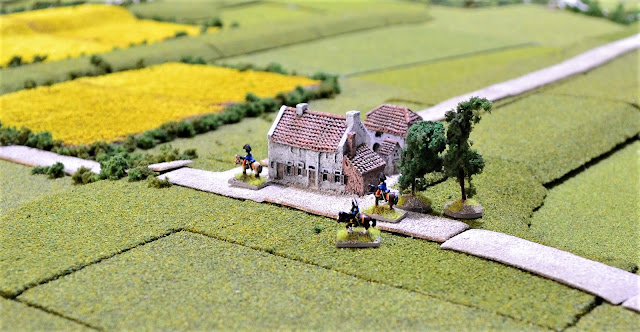 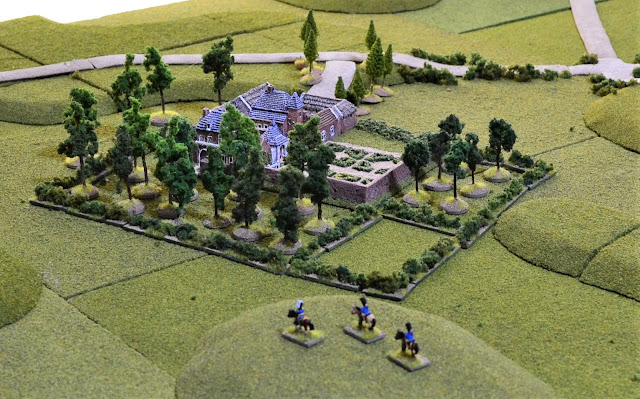 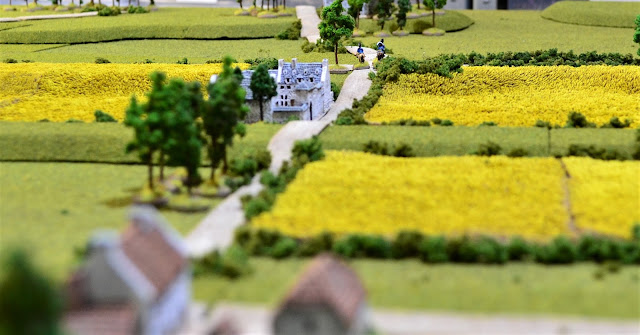 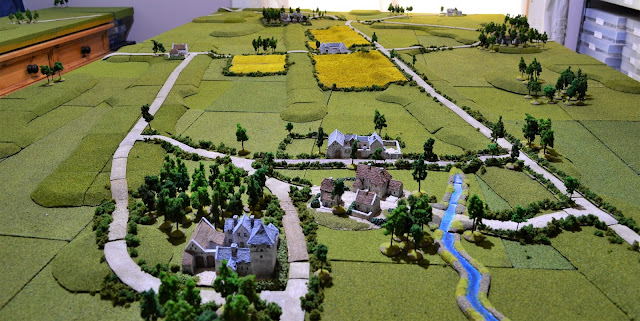