On the Workbench: Rebasing WW2 Infantry

After much dithering, and following some of your helpful advice in a previous blog on this subject, I have finally settled on a thickness for my WW2 infantry bases: 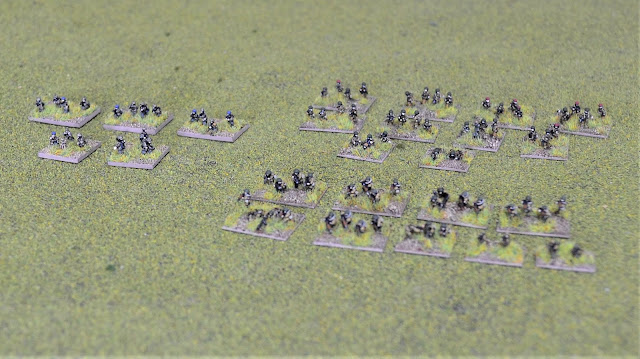 The rebased Russians to the front with some rebased British paras to their rear, contrasts with the original card based Germans on the left.

I purchased several test sheets of plasticard ranging from 0.25mm to 1.5mm thickness. My original plasticard used was approximately 0.3mm - 0.35mm thick which I considered a little too thin. It was therefore a trial between the 0.50mm and 0.75mm sheets.

There was little to choose between them with regard to figure handling and overall look. After a good deal of head-scratching I settled on 0.5mm. It brought the figures slightly more into height proportion when stood next to unbased vehicles and although a minor issue, it was easier to cut. I also decided to stick with the same basing finish.

Having rebased a number of figures I am now convinced I made the right decision. Unfortunately this will mean rebasing all my WW2 collection, but thankfully is not too great at this stage.

This will be my final post before commencing my holiday next week. I will be accessing the internet periodically so will endeavour to deal with any queries that surface while I am away.

In the meantime enjoy your wargaming over the next few weeks and service will resume in late March.

On the Workbench: WOTR - Lots of Armour!

After a rather busy week I have managed to complete all the additional mounted and dismounted men-at-arms required for the forthcoming Wars of the Roses Kingmaker game - The Battle of Shrewsbury. 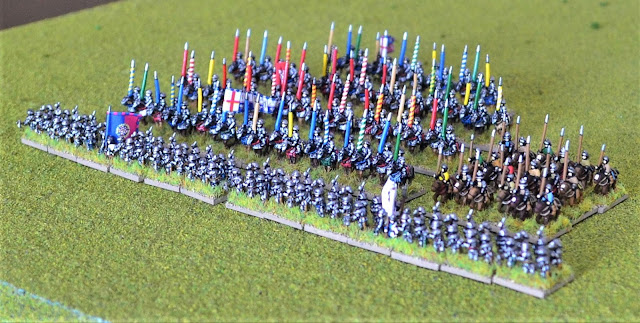 Light cavalry was also finished and as a result it is only foot figures now required before gaming can proceed.

I am still experimenting with the armour and reasonably happy so far. Basically started with block painting of silver, black wash and then a drybrush of the same silver (in this case Foundry). I had initially tried the GW Nuln Oil but it did not define the features as much as I would have liked. It could be because of the small scale. Their old Armour Wash was better. A thinned down black was used instead but in the longer term I am planning to knock up my own 'magic wash'. i.e. floor polish mixed with black paint.

Labels: On the Workbench, Wars of the Roses

On The Workbench: Trees Finished

Finally I have completed the tree upgrades:

I did not count them but there are a lot! To give some idea, there are 30 pine trees in the bottom left. These are all cheap trees purchased from China and can be seen in their entirety in the ACW Battle of Seven Pines. They have been bulked out using Woodland Scenics clump foliage. Their bases have also been improved with various foliage hiding the sharp edges of the mostly mdf bases. A number of them, including the pines, have penny coins for bases which I will be using in the future. Their weight gives added stability.

In time these will be added to, especially the pines - you can never have too many trees! For the time being I will be placing terrain on the sideline as I concentrate on completing my Wars of the Roses figures for the next game in the Kingmaker campaign. With only 2 weeks to go before my long 5 week break I will also be suspending my games to get as many figures painted as possible beforehand. So please bear with me as there will be no AAR's for a couple of months.

As an aside I have been listening to the back catalogue of podcasts by the comedian Al Murray and historian James Holland called "We have ways of making you talk".
https://www.history.co.uk/article/we-have-ways-of-making-you-talk
If you are not aware of this podcast I highly recommend it. It began earlier last year and concentrates on WW2. Great to listen to as you paint.
Posted by Jon Bleasdale at 18:34 10 comments:

On The Workbench: WW2 Infantry Base Thickness Test

A question for readers of my blog.

I have finally got around to trying out Peter Little's suggestion of using thin plasticard to reduce the thickness of some bases.

A trawl through my 'odds and sods' boxes located a sheet of plasticard I had acquired in the 80's, possibly even the 70's! The thickness appeared to be in the region of 0.3mm - 0.4mm. I painted up 4 Russian riflemen for a trial: 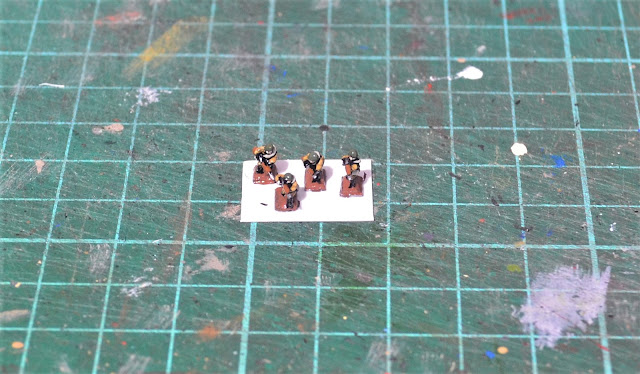 The bare card prior to completion and gives some idea of how thin it is. 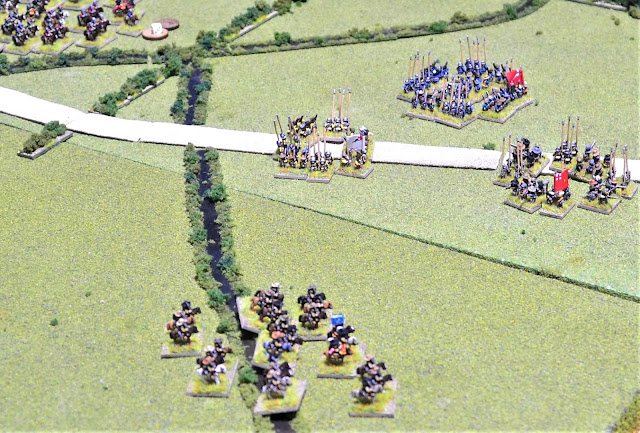 With Royalist cavalry in the vicinity, the Parliamentarian foot regiments form pike stands. In the foreground, Bennet's Horse ignore the Roundhead foot and gallop headlong towards the baggage train. 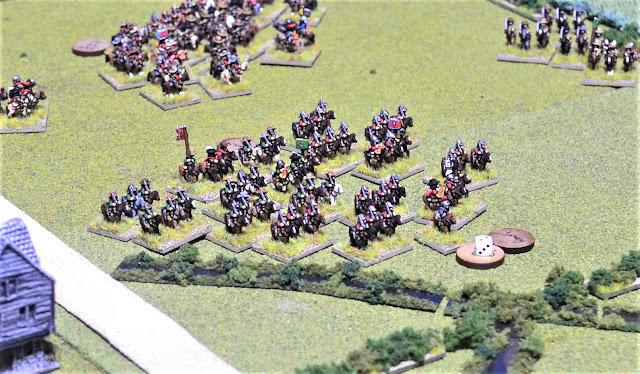 Gould with his own Horse rout pursued by Carnarvon's regiment and Maurice's Lifeguard. They suffer more heavy casualties with Gould receiving a serious wound. Hopton managed to extricate himself from the pursuit (top left) ready to intervene if necessary in what will prove to be the last melee of the game.

It is the start of turn 9 when the Parliamentarian foot regiments must retire from the field. Circumstances though are beyond their control and not yet in a position to retire. 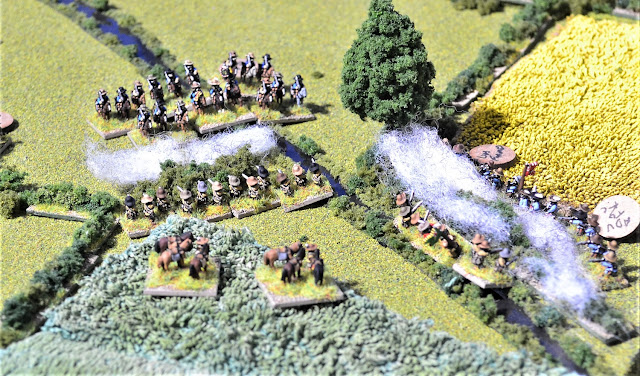 Starting with the Royalist left flank, Hungerford's dragoons continue to hold the hedgerows although Hopton's dragoons gradually get the upper hand against the company of Parliamentarians opposite them. Having moved to close range their superior numbers begin to tell.

Vaughan infuriatingly again fails to motivate his raw troopers into charging the Parliamentarians. 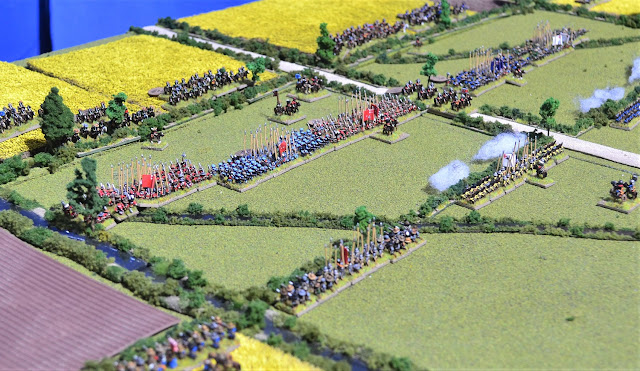 The preliminary turns saw the Royalist foot regiments negotiating the crop fields and hedgerows. Another turn was taken up reforming and it was now turn 3 before they could move into musket range. The yellowcoats of Strode's regiment were the first to open fire. At long range they proved to be of minimal effect. Hertford's redcoats declined to reply knowing that at this range it would be lucky indeed if they scored a single hit.

This scenario is taken from English Civil War Campaign Scenarios - The 1643 Campaign for the South-West.

This battle was a rearguard action by heavily outnumbered Parliamentary forces falling back on Wells. They were involved in holding off the advancing Royalists giving their baggage train time to retreat to safety.

This action occurred on 12th June 1643 and the map shows the starting positions. The Parliamentary baggage train has already left the table on the road to Wells.

The battle will be fought using 6mm figures by Baccus on a 3'9" x 3' board. Forlorn Hope rules to be used. 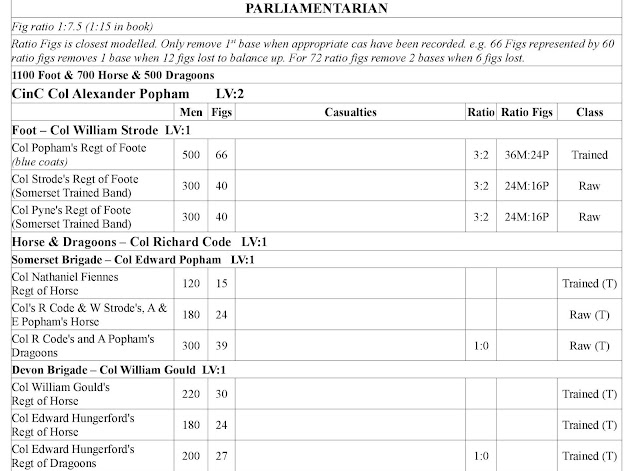 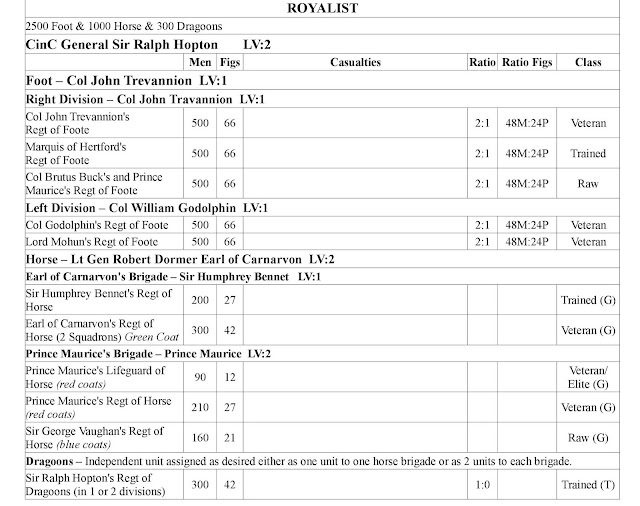 Before I start I should mention there are 2 events which will impact on my wargaming this coming year. From mid February I will be away for 5 weeks. The second, and rather more impactive, is a house move. Assuming we manage to sell our house ok we intend to move before the end of the year. This will severely restrict the gaming side of the hobby although I hope to maintain at least a degree of figure painting. One of the criteria for our new home will be it possesses, or has the potential to possess, a wargames room. So, all being well, normal service should be resumed in due course. It may of course give me the opportunity to experiment with skirmishing in 6mm. Chain of Command on a coffee table looks promising!

My plans therefore will be more modest than usual. As in previous years I will break it down to 3 sections: Battles, Campaigns and Painting/modelling:

Hope you all had a great Christmas. It is that time of year to review my wargaming through 2019.

What I had not planned at the start of the year was to sell off my entire 15mm collection. This was a time consuming exercise which detracted from my wargaming. Both number of games and figures painted fell short of what I had anticipated.

In looking back over the past year I will refer back to my original plans and examine what has been achieved and what has not. Under each of the three headings, 'Battles', 'Campaigns' and 'Painting', I will add what I have completed but not planned for originally.

On to the review. The text in Italics is taken directly from my original 'Plans 2019' -