Hope you all had a great Christmas. It is that time of year to review my wargaming through 2019.

What I had not planned at the start of the year was to sell off my entire 15mm collection. This was a time consuming exercise which detracted from my wargaming. Both number of games and figures painted fell short of what I had anticipated.

In looking back over the past year I will refer back to my original plans and examine what has been achieved and what has not. Under each of the three headings, 'Battles', 'Campaigns' and 'Painting', I will add what I have completed but not planned for originally.

On to the review. The text in Italics is taken directly from my original 'Plans 2019' -

Although this is ready to play, I have repeatedly sidelined it in favour of 6mm games. It is my intention to focus purely on one scale (with the possible exception of a limited use of 2mm) but I just cannot bring myself to sell off those excellent Pendraken figures. More of my plans for this scale on my 'Plans for 2019' posting due early in the new year.

Talavera - The next battle in my Peninsular War project. There will be a question mark as to whether I will achieve playing this before the year end. I estimate 1,000 - 1,500 6mm figures will need to be painted, mostly Spanish.

With only 234 Spanish painted there is a long way to go before this battle is ready. One of the casualties of time spent on ebay sales.

Grissburg - The next battle in my Napoleonic Campaign. Terrain, in particular buildings, need to be acquired and painted. I am placing this battle on my 'must do' list to move the campaign along. 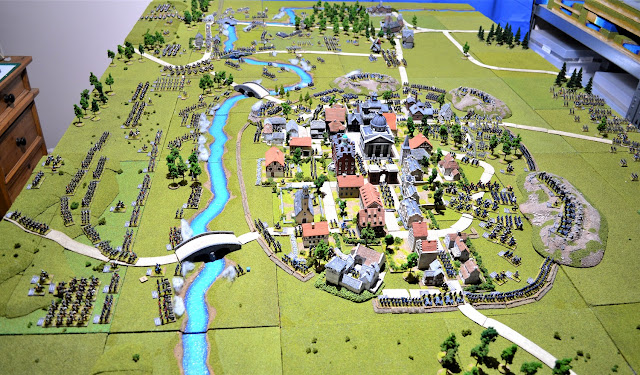 This battle turned out to be my big game of the year. It was played June - July and although a decisive French victory it did not achieve the wholesale destruction of the Prussian defenders Napoleon was hoping for. The Prussian Army had been bloodied but was still a formidable fighting force. 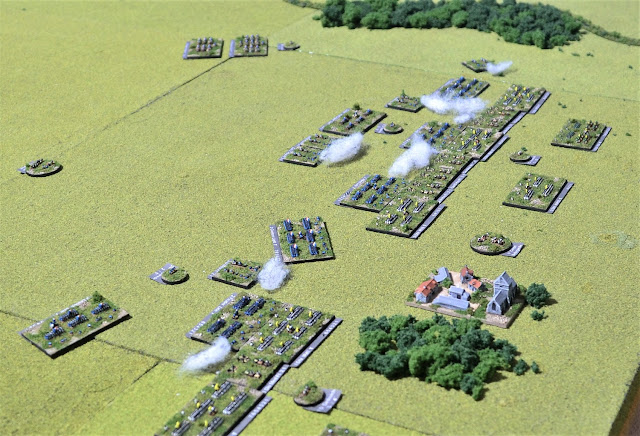 This was an unplanned diversion into another scale. I had become tempted by photos of 2mm figures in action and provided a possible route into playing large Napoleonic battles such as Austerlitz and Borodino. The game, played in October, proved to be a little underwhelming and the jury is still out for 2mm.

Gettysburg - Day 2 scenario from the original Fire & Fury book. i.e. the entire battlefield, using approximately 4,000 6mm figures. This will be brigade level using the F&F orbats from the book. It will be a straight forward conversion for Guns at Gettysburg rules with my own amendments including units representing brigades rather than battalions. Figures are complete but I have some work to do on terrain before this will be ready. I am making this my big game of the year and am determined to get it played!

I may well have been determined at the start of the year but sadly this was another ebay casualty. More buildings have been painted and in that respect progress has been made on the terrain required. 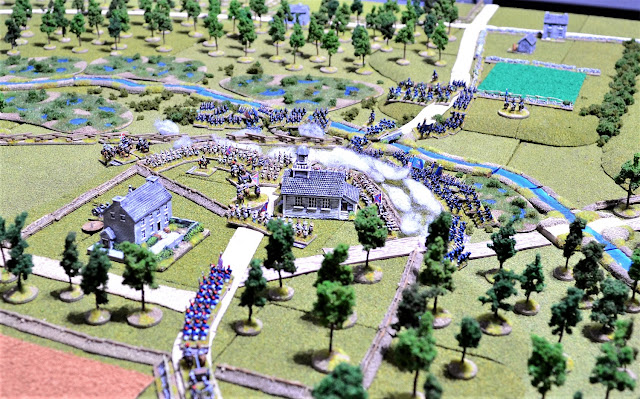 This was my first game of the year played in January. An outnumbered Confederate force holding a strong defensive position held out defeating the Union attackers.

This followed on almost immediately from 'Big Bethel' and played late January to early February. It displayed what could be achieved in 6mm on a small board of 3'9" x 2'3" and yet still thoroughly enjoyable. This battle could have gone either way and finished with a marginal Confederate victory.

This turned out to be a good year for ACW with more battles played that had not been included in the yearly plans: 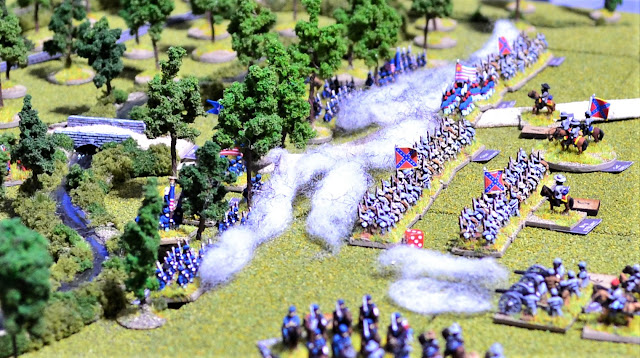 Another small battle on the same sized board as 'McDowell'. This game saw the first outing of my railway track and 'upgraded' streams. This was played in April and yet another Confederate victory. 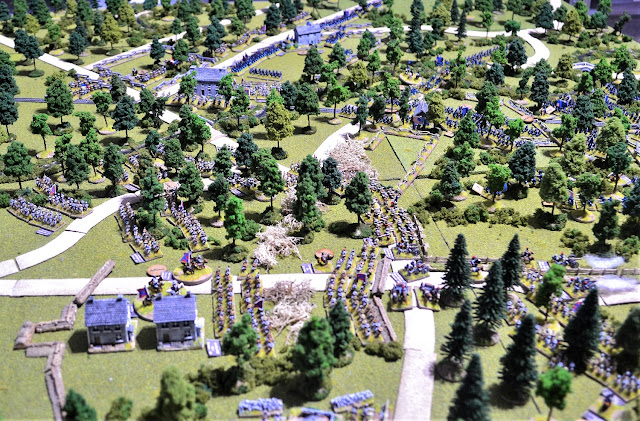 The last of the ACW battles and for that matter the final game of the year was the large Battle of Seven Oaks taken from a Fire & Fury scenario book. A 2 day battle played in November and December with the Union forces ending a bad year for them with another defeat.

Having fought the first battles of the North Africa campaign in 1940, I now continue with Operation Compass actions. Using Blitzkrieg Commander 2 (or 4 if available) rules:

Nibeiwa 9th Dec 1940 - All figures complete. Terrain to be finished 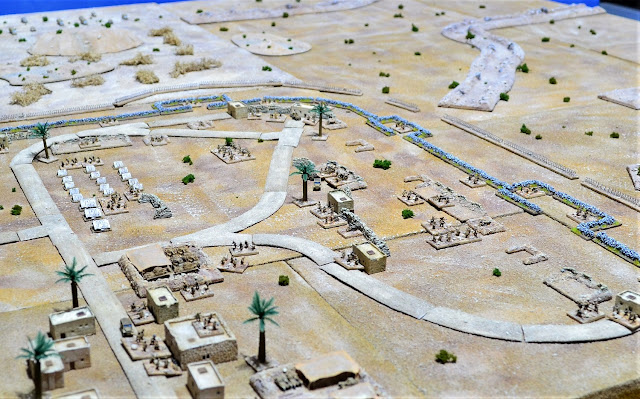 Played in February, this proved to be an immensely enjoyable game cementing my positive view of the Blitzkrieg Commander rules. A British victory although they suffered more casualties than in the historical battle.

Matkila 11th Dec 1940
This was scrapped and replaced with two others from the Op Compass Battle of the Camps: 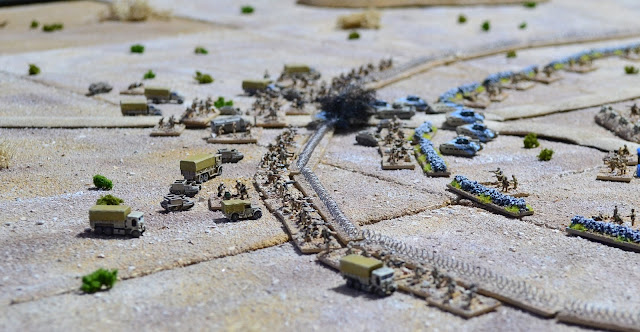 This immediately followed 'Nibeiwa' and played in February. Another fairly easy British victory.

This will be the final action in the Battle of the Camps section of Operation Compass. Played in October this was the first outing for Blitzkrieg Commander IV. At last an Italian victory as they held out against an armoured assault.

Op Market Garden - This will depend on the schedule release of the new sculps from Heroics and Ros. Into the Woods from the Rapid Fire Scenario book will be the first to play all being well.

Allied landing on Rhodes - from the Operation Nostalgia campaign.

Figures are ready and most of the terrain pieces acquired but yet to be painted. Having missed this year I intend to rectify that next year.

Battle of Grissburg played with subsequent map moves completed leading up to the 2nd Battle of Brandenlea (Spain) to be gamed, hopefully next year.

Wars of the Roses:
Kingmaker campaign to continue.

This is the one campaign that is not being played solo with my son Jack being the opponent. Rather than game the Siege of Alnwick we decided to play it through as per the board game. Further map moves and sieges have been completed leading up to the Battle of Shrewsbury. More figures will need to be painted for this game, the first of which are on my painting table.

Colonial:
This is a campaign in 15mm I started 9 or 10 years ago but with very little progress. It was set in a fictional Sudan but I intend to have a fresh look at this. I have a sizeable lead pile in 15mm as well as several Nile steamers yet to be constructed.  The Sword and the Flame rules to be used. Having failed to do anything with this last year I really hope to kickstart the campaign this year!

With the sale of my entire 15mm collection this campaign has been scrapped. There is a chance I will pick it up in 6mm but that will be for the future.

WW2:
Operation Nostalgia - With the preliminary air and sea battles fought the landing on Rhodes beckons.

This has been at a standstill this year. The size of board required would have taken up most of my wargames room at a time when I needed part of it to complete my ebay sales. It will definitely be on the agenda for next year.

Wars of the Roses 6mm - Almost certainly more will be required for the Kingmaker campaign. A rough estimate of 500 more figures is pencilled in.

WW2 6mm - For Op Nostalgia approximately 200 to 300 figures and 50 vehicles/armour/guns to be completed. More will be required for NW Europe depending on H&R new figure release schedule.

288 figures and 47 vehicles completed although not entirely all for Op Nostalgia.

The number for 2mm is obviously greatly flattered by the fact they are not individual figures but contained within molded blocks. I would guess it is equal to 200 - 300 x 6mm.

I aim to paint at least 2500 and preferably 3000 x 6mm figures each year which had been the average rate recently. Some thought will be required for next year to achieve this.

Following completion of my AWI figures, attention will be turned towards completing terrain for:

I also hope to continue sprucing up my existing commercially built terrain boards.

This will be an ongoing project for some time to come. I completed upgrading my stream sections this year together with the creation of small streams/run offs using an acetate base.

My cheap tress from China have been receiving attention starting this year and well on the way to being completed. Clump foliage of different shades have been added to bulk them out and their bases have also been improved.

On the whole it could have been worse with my wargaming time being impacted with ebay sales. I was disappointed not to have played the invasion of Rhodes and I would have liked to have made more progress in preparation for Gettysburg.

The diversion into 2mm had mixed results. With hindsight I probably should have gone with smaller bases. Unless you make the base very plain it is easy for the figures to get lost within the 'foliage'. I have not completely give up on the scale but will be mothballed for now.

Since clearing out my 15mm it has refocused my intention to game in just one scale (something else which puts a question mark over 2mm). This leaves me with a conundrum for my 10mm AWI. On several occasions this past year I had every intention of playing 'White Plains' but 6mm repeatedly muscled in! I may try again next year and then make a decision on their future.

For newcomers to the blog, you will find all the battles mentioned above either within the labels on the right or on the blog archive.

I would also like to thank all the contributors to the comments section. It is very much appreciated with some very useful hints and recommendations.

I do have a question though regarding the AAR's. I am very conscious that many, if not most, are rather long and picture heavy. Not everybody wants to devote the time reading through the reports and would rather just have a snapshot with a handful of photos. When deciding on future AAR's I would be very grateful for your views. Are they:
Too long?
Too short?
Just about right?
I would appreciate it if you could give your views in the comments section along with anything you would like to see that I have not included.

In a few days I will post my plans for 2020 and in the meantime continue to enjoy the holidays.